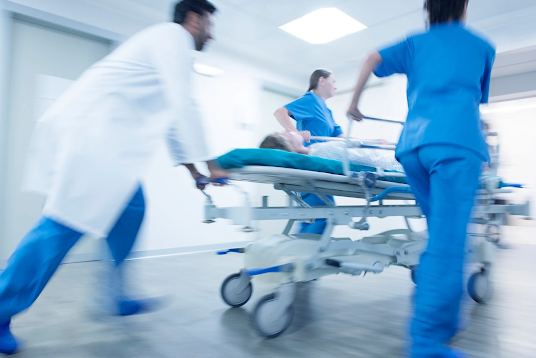 Starting with Curtin and Chifley, every federal Labor government has redesigned the nation’s health system. Based on what they’ve said so far, this government will do the same.

There is no prospect that Anthony Albanese would permit his Labor government to be the first in a century not to reform and redesign a system that is clearly no longer fit for purpose.

Labor’s underwhelming campaign promises will do little to improve a healthcare system which in every state and territory is in deep crisis. The 50 “urgent care clinics” work out to one clinic for every 520,000 people. Any change they produce will be swept away by ever-increasing demand.

It is now becoming evident that the small target the ALP adopted for the election will not be the way they mean to govern. But it will take time. Don’t expect any huge changes this year, or perhaps even next.

So far, the government has given these clues about its immediate reform priorities:

·       For now, the emphasis will be on Medicare, not hospitals. The Health Minister, Mark Butler, has rejected the states’ push for an increase in federal funding for public hospitals. He said the present funding agreement, due to expire in 2025, will continue.

·       General practice will get immediate attention. “I have no higher priority than rebuilding general practice,” Mr Butler has said. “We fund and largely regulate and support general practice, the same in aged care, and when those systems break down, the lightning rod ends up in the emergency department of the local hospital.”

·       Funding for telehealth consultations is certain to be extended and perhaps made permanent.

·       Workforce shortages throughout the health and aged care systems are seen by the government as a priority. But apart from streamlining the visa process for migrant health workers, no real solutions have been announced.

·       Too many trainee doctors are choosing specialties rather than general practice.

·       Not enough doctors and nurses are being trained.

THE PATH TO REFORM

If that was all, the premiers would not have been as happy as they seemed after the National Cabinet meeting. Fortunately, it was not all. Instead, the new Prime Minister flagged a major redesign of the entire national health and hospital system.

“Importantly,” said Anthony Albanese, “we've agreed as well that the first secretaries led by Glyn Davis, the head of the Department of the Prime Minister and Cabinet, will conduct a process of review of health funding and health arrangements, looking at health reform.”

This is a public service review at the highest level. But the interim Covid funding measures will end in December. There is now an expectation – particularly among the premiers – that there will be a meaningful path to reform well before then. If there’s not, the outcry from the states, doctors, nurses and the public will be immense and politically damaging.

“What that’s about isn't necessarily additional dollars,” insisted the Prime Minister. “I've made very clear that the Government has inherited $1 trillion of debt.

“The debate that we had [in National Cabinet] wasn’t about dollars … it was actually about how you get reform. It was how you get efficiencies, how do you make sure that patients are at the centre of the system.”

Mr Albanese is correct to believe that meaningful change cannot be achieved simply by throwing more money at a fragmented system that is inherently inefficient. Fixing it will not be simple, quick or cheap. But it never is.

The central problem – the states are responsible for public hospitals and the Commonwealth for the rest – is easy to identify but hard to change. But for almost a century, the trend has been toward greater and greater federal involvement. The reforms have always come from Labor governments, starting in 1944 with Curtin and Chifley.

As part of the post-war reconstruction program, Curtin tried to introduce a National Health Service four years before Britain. It was rigorously opposed by the conservatives and the doctors’ lobby but it produced two important things: constitutional powers for the Commonwealth to fund health services, and the Pharmaceutical Benefits Scheme.

Whitlam introduced Medibank and free public hospitals. Medibank, after being dismantled by the Fraser government, reappeared under Hawke as Medicare. Dentistry was left out.

But these changes, however important, aggravated the problem of fragmentation. Kevin Rudd tried to address it – remember those interminable hospital visits? – but fumbled it.

The Davis review will be expected to provide workable answers to this central problem. In doing so, they will look at why the Rudd reforms failed.

Mr Rudd’s idea was for the Commonwealth to become the dominant funder of all healthcare, with responsibility not only for Medicare and the PBS but also for running public hospitals and paying 60% of their cost. The proposals fell over for two reasons: the states knew the Commonwealth did not have the expertise to run hospitals; and the proposal involved the states in giving up 30% of their GST entitlements.

The Rudd reforms failed because he overestimated the administrative capacity of the federal Health Department, and because he was trying to do it on the cheap.

Eventually, the Commonwealth will have to take responsibility for the whole system simply because it’s the only level of government capable of raising enough money. Having a single, dominant funder doesn’t guarantee efficiency and coordination, but it’s a probable pre-requisite.

Medicare is now a comprehensive failure and needs basic reform. Out-of-pocket costs are out of control and are shutting too much of the population out of health care. Few specialists bulk-bill. GP patients routinely pay as much as half the cost of a consultation – if they can get an appointment at all.

Failure to fund dentistry has given Australia a shameful record in oral health.

Rudd’s Primary Health Networks were supposed to coordinate general practitioners with each other and the broader health system, to achieve a more seamless treatment for patients. They have failed.

Nurses in large numbers have been resigning from public hospitals because of burnout and chaotic working conditions. This won’t be fixed until hospitals are provided with workable resources. Higher pay is needed but it’s not the main problem.

The premiers have a good case for increased federal hospital funding. No state except Western Australia can afford to run its public hospitals and build new ones without borrowing heavily.

HEALTHCARE ON THE CHEAP

Can there be effective reform without a major injection of federal money – which the government keeps saying it doesn’t have?

All up, this country will spend around $225 billion on health this year. That’s $4.3 billion a week, $616 million a day. That’s less than it looks. As a proportion of GDP, the best measure of what an economy can afford, it’s substantially less than in most of the countries with which we like to compare ourselves. 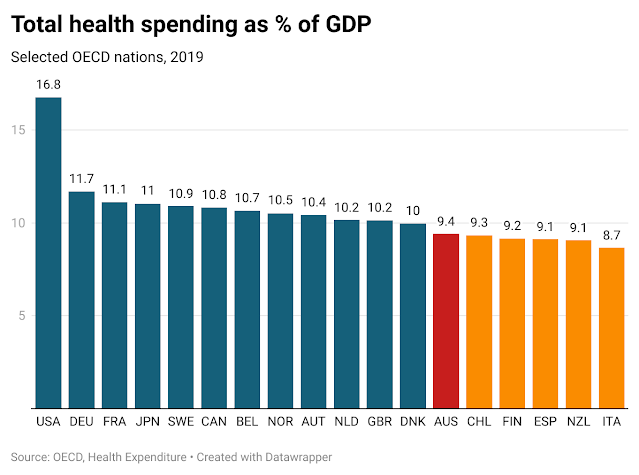 On the basis of what an economy can afford, even Chile is spending more than we are. And the countries with the best healthcare – mostly those in western Europe – are spending much more. The United States, as usual, has the worst of both worlds – the most expensive system delivering the worst outcomes.

And it’s nonsense to suggest our governments’ share of health funding stacks up against the rest of the world. It doesn’t. Even in the US, the government share is substantially higher than it is here. For the past two and a half decades, Coalition governments have shifted responsibility for health care off of their own budgets and onto individual Australians. This is what we’re left with: Delaying the introduction of major reform until the current funding agreement expires in 2025 will give the government time to find more money. The budget is in a far less dire state than the Treasurer claims, but eventually more tax will have to be raised. Doing that in this term of government would break a major election commitment.

It will also allow full negotiations between the states and the Commonwealth. In the longer term, that’s a better alternative than the feds trying unilaterally to impose their formula. That was Rudd’s mistake.