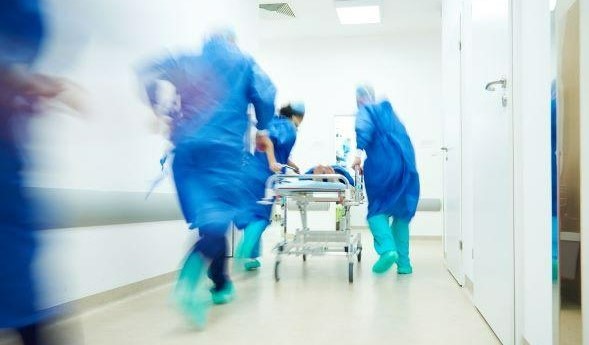 Every element of the Australian health system is in deep dysfunction. Hospitals in every state are in greater disarray than ever before. Emergency department overcrowding alone is killing as many people as the road toll.

Patients in urgent need of surgery continue to wait in pain as their conditions worsen.

Every state has a severe and worsening shortage of doctors, nurses and allied health practitioners. Too many are leaving the system – through retirement or burnout – and too few are being trained.

If, as we are constantly told, this is a crucial election, why don't any of the three main parties have a ghost of a plan to address these issues?

The Liberals are running on their record. The fact that their record is one of continued and accelerating chaos everywhere you look doesn’t seem to register with them – or, they hope, with voters.

“The government will continue to back our health system, by guaranteeing record levels of funding for hospitals, medicines, aged care and Medicare,” says the Liberal policy document.

Let’s deconstruct that. If you increase hospital funding by 2%, but costs rise by 3% and demand by 4%, that’s still record funding. Isn’t it?

“Since we came into government, more than 2,900 new or amended medicine listings worth $16.5 billion have been added to the Pharmaceutical Benefits Scheme.”

No government has any real control over the medicines on the PBS. The National Health Act forbids the listing of any drug that has not been assessed as cost-effective by the independent Pharmaceutical Benefits Advisory Committee. The government can delay listing (as this government has done) or refuse listing altogether, though that seldom happens under either party.

“To further reduce costs, a re-elected Morrison government will also lower the PBS Medicines General co-payment from 1 January 2023 by $10 per script.”

This will bring the co-payment down to $32.50 every time someone fills a prescription. Neither party has a good record on this one. The Hawke-Keating government found the co-payment at $4 in 1983 and left it at $17.40 in 1996. The Howard government bumped it up to $30.70 and it’s risen further almost every year since then.

Of the 5o most-prescribed drugs on the PBS, only seven cost more than $32.50. For people filling scripts for the other 43, the PBS will continue to be irrelevant. No subsidy will be involved. In any case, none of the top-50 medicines will be affected by the change.

Nothing will happen for another eight months. And concession card holders will continue to pay what they’re paying now.

“We have taken steps to make private health insurance simpler and more affordable. Reforms have resulted in the lowest premium changes in 21 years (2.7% in 2022).”

Nothing the government has done has changed the ever-increasing gap between premiums and wages. Categorising policies as gold, bronze and silver has done little to make choice easier and nothing to make insurance cheaper. The lower-than-usual annual price hike is solely due to the windfall the insurance companies reaped – and kept – during the pandemic lockdowns when many people stopped going to the doctor but continued to pay their premiums.

In short, there is almost nothing in the Liberal election pitch that wouldn’t have happened anyway, and nothing at all to address the profound problems facing the health system and everyone who uses it.

“Millions of Australians will save $12.50 on medical scripts under an Albanese Labor government.”

This announcement came very shortly after the Liberals promised to cut the PBS co-payment by $10. The extra $2.50 adds little: of the top 50 PBS drugs, it will affect only one. People filling a script for a treatment for benign enlarged prostate will now save $1.64 a month.

“Labor will deliver 50 Medicare Urgent Care Clinics, to take the pressure off our emergency departments.”

These will have no noticeable effect on the workload in the nation’s 294 public hospital emergency departments, which together deal with 9 million presentations a year. Only 9.3% of these are lower-urgency GP-style patients likely to be treated in Labor's clinics. These are quickly dealt with and add little to workload. Those 50 clinics will have some impact on the very large number of patients who can’t get into one of the nation’s 7,000 GP practices, but it won’t be much.

“An Albanese Labor government will make sure health and well-being support for our frontline nursing heroes is available across the country with a new National Nurse and Midwife Health Service.”

The details are sketchy, but it appears to provide counselling to burnt-out nurses. “Information, advice, treatment and specialist referrals” are promised. But only $23 million is budgeted, presumably over four years and spread across every state and territory. There are no plans to reduce workload, address chaos and overwork, or to do anything about pay and conditions. But they’ll have somebody they can ring up.

An Albanese Labor Government would improve pandemic preparedness and response by establishing an Australian Centre for Disease Control.

This was announced so long ago that it doesn’t really count as a campaign promise, and it’s right on the bottom of the Labor list. It is, though, the only substantive reform promised by either major party. As Labor says, Australia is the only OECD country without a national body to track infectious diseases and to coordinate the response. It’s not a solution to the other issues facing the health system, but it’s at least something serious.

“The Greens will stop the handouts to big private health corporations by abolishing the private health insurance rebate, freeing up $59.4 billion to invest into the public health system.”

These figures don’t add up. The federal government spent $26 billion a year on public hospitals in 2019-20. The cost of the premium rebate is $6 billion a year, not $59.4 billion. That cost has been falling for a decade, as people downgrade or abandon private health insurance. The premium rebate was always bad, inefficient policy, but suddenly abolishing it now would massively increase premiums and trigger an exodus from insurance. In turn, this would cause the financial collapse of most private hospitals in the country. As they provide one bed in three nationally, it would cripple the entire hospital system.

Elective surgery blitzes are a favourite response of opportunistic politicians of all types. They have never worked: they seldom achieve their stated goals and as soon as they’re over, waiting lists soar again. There is no indication in the Greens’ policy of where in our overcrowded hospitals these extra people would be treated, or where the surgeons, anaesthetists and nurses would come from.

“The Greens will invest an extra $8 billion into our public hospitals by legislating for equal (50/50) funding growth of hospitals between the states and the Commonwealth.”

An extra $8 billion a year would increase the total amount spent on hospitals by 12%. All parties have been urged to do this, but neither of the two major parties have mentioned it. The Rudd-Gillard government introduced a scheme by which the Commonwealth funded 45% of the average cost of treating each patient, and lost office before it was raised to 50%. Under the Coalition, that increase has never happened. It does not appear in the current Labor proposals.

“The Greens will invest $77.6 billion over the decade to provide Medicare-funded dental care for all.”

All levels of government have left dentistry almost entirely to the private sector, with devastating results. (I’ve examined this issue in depth in this previous post.) But the Medicare pattern won’t work, for the same reasons it doesn’t work for specialist services. Dentists, like surgeons, will go on charging well above the Medicare rebate. And it will be inflationary, because current dental patients will – with the new rebate – be able to afford higher bills. The only solution is public dental clinics funded by the Commonwealth and run by the states. The Greens policy will not work, and the other parties have ignored the issue entirely.

"The Greens will establish a National Centre for Disease control with $246 million of funding."

This echoes the Labor promise on the same issue. The funding number is sneakily vague: over how many years would this money be spent? As with the rest of the Greens funding promises, they aren't telling us.