A nine-year fight against a government’s inhumanity. 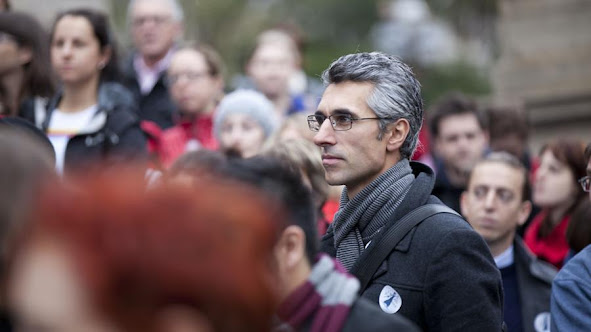 In 2013, when Hugh de Kretser became CEO of the Human Rights Law Centre, Labor was still in power. Within weeks, Kevin Rudd had capitulated on rights for asylum seekers, Tony Abbott had become Prime Minister and Scott Morrison was in Immigration.

Now, just as Labor returns to office and the prospect brightens, Hugh is leaving. The timing may be questionable, but the achievements are not.

“We saw in 2013 there was going to be an acute need for human rights help for people who were detained indefinitely offshore,” he told me, “and we fought tenaciously to dismantle that offshore regime through litigation, advocacy and campaigning.

“That tenaciousness worked, and our independence appealed to supporters. So we were able to build a really strong program of action around refugee rights. And we replicated that with aboriginal rights and democratic freedoms.

“That has really driven the growth of the organisation over the past nine years.”

JUSTICE AND THE LAW

In a nation where the rule of law has more or less survived, the courts can be a powerful instrument for simple human decency. But the people most in need of the law seldom have access to it. They don’t know how or can’t afford it: most often, both.

The Human Rights Law Centre began in 2005 around an apparently simple  idea – to coordinate pro bono lawyers in litigation in support of powerless people whose civil rights were being trampled. There was, at first, one employee – but that idea took hold.

When Tony Abbott – “the most destructive politician of his generation” – became Prime Minister, marginalisation and vilification of refugees became a constant means of easy political advantage.

“Under a hostile government, your work is about addressing acute injustice and mitigating bad things,” Hugh said. “The treatment of refugees galvanised a lot of support for the Centre.

“Governments know that when they treat people badly, what will motivate opposition to their policies is when the Australian public has a human connection with the people we’re treating badly. So it’s no surprise that people are held on offshore islands thousands of kilometres away. It’s why people are held behind fences, why media access is restricted, why mobile phones are banned.

“All of these things are set up to try to make it harder for there to be scrutiny and accountability; for there to be that emotional connection to the injustice happening to other human beings.

“We knew it was critical for us to get there. My colleague, Daniel Webb, was one of the first people into the Manus Island Detention Centre as part of a PNG national court inquiry.

“Ultimately, it was a PNG court that the ongoing detention was a breach of the human rights guarantees in the PNG constitution, which are far stronger than those in the Australian constitution.

“Successive Coalition governments tried to put [its detention] regime outside the scope of Australian law and we used different ways to try to bring that back in scope, including what became known as the M68 case.”

In a crucial High Court case early in 2016, the HLRC represented 267 refugees who had been moved to Australia from Nauru, mostly because of serious medical conditions. The group included 33 babies born in Australia to asylum-seeker mothers. The government of Malcolm Turnbull, with Peter Dutton now as Immigration Minister, wanted to deport all 267 back to Nauru.

“We argued that it was actually the Australian government doing the detaining on Nauru and that the detention wasn’t authorised under Australian migration law.”

When it became clear during the case that the government was going to lose, a special retrospective law was rushed through the parliament. Only then did the HLRC lawyers – and those vulnerable refugees – lose.

“That was the case that triggered the “Let Them Stay” campaign that we ran with GetUp! and the churches’ Refugee Task Force,” he said. “The public pressure from the legal case and the subsequent campaign shamed the government into letting the asylum seekers stay.

“The babies who were the faces of that campaign were able to grow up in freedom and safety in Australia instead of in detention on Nauru.”

‘THIS SHOULD COME AS NO SURPRISE’

There were few easy wins during Hugh’s nine years battling a cruel and callous government. But – as with the M68 case – even apparent losses can carry the seeds of eventual victory.

That’s what happened in another landmark case. This one involved the secret detention at sea in 2014 of 157 Tamil refugees who had fled Sri Lanka after experiencing persecution and fearing torture. And it involved the Australian government’s attempt to deport them, also in secret.

The group originally fled to India, then – like others in equally desperate situations – got on a boat and set off for Australia. On a satellite phone, the asylum seekers told refugee groups in Australia they were close to Christmas Island, but were experiencing severe engine trouble. Suddenly, all contact ceased.

The Immigration Minister, Scott Morrison, refused to say what had happened to those refugees, who included 50 children and infants. “I am not confirming any of these matters,” he told journalists. “This should come as no surprise to you. This is another day at the office for Operation Sovereign Borders.”

Only when a case was brought in the High Court did the government finally admit that they had been intercepted by an Australian customs vessel and were still being held incommunicado on that vessel.

As the customs boat crossed the Indian Ocean three times, travelling for weeks to the coast of India and then back to Australia, the asylum seekers spent at least 22 hours a day locked in windowless rooms. They did not know where they were going or what would happen to them. One woman was pregnant; others needed medical care. They were not asked why they had left India or Sri Lanka, or whether they had safety fears if they were returned.

As the case finished in the High Court and the judges had retired to consider their decisions, the government passed new legislation which removed any obligation under domestic law requiring it to consider international human rights obligations or the principles of natural justice when conducting boat turn-backs.

The refugees lost their case and were sent for indefinite detention on Nauru.

But then the campaigning ramped up. “Through our various campaigns and advocacy, those families are now in Australia and I was able to have lunch with the lead plaintiff,” Hugh told me. “Moments like that underscore why we’re doing this work.”

From its beginnings in 2005 with a single employee, the Human Rights Law Centre now has 28 staff and an annual budget of $4 million, all of it from donations and without relying on government. That’s powerfully topped up with pro bono work – including by some of Australia’s leading barristers – worth around $10 million.

At the end of June, Hugh de Kretser will leave for his next job. He will become CEO of the Victorian government’s Yoorrook Justice Commission, the truth and justice process for First Peoples in Victoria. It’s based on the Truth and Reconciliation hearings that accompanied the end of apartheid in South Africa.

Meanwhile, he’s upbeat about the potential for major human rights advances under the new federal government: “In one sense, I have some regret that I won’t be working [with the new Attorney-General, Mark Dreyfus] with the potential that we have now to realise significant human rights progress in Australia.

“The thing that’s biggest in my mind is the chance to get a Charter of Human Rights in Australia. There have been attempts over the years to establish one. We came close in 2009-2010 but the Rudd government didn’t implement that recommendation.

“We now have a real opportunity to get that reform happening, and it will be a hugely positive thing for Australia when it is done.”