The Renegade: Greg Barns on law, prisoners, a republic – and fleeing the Liberals. 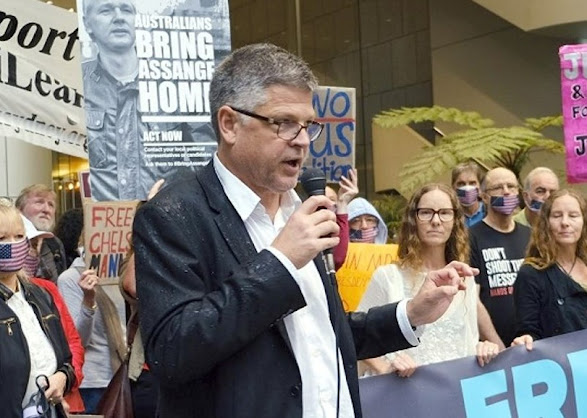 Even now, Greg Barns insists he’s still a liberal. Small l. That’s a bit surprising, when you think about it.

He’s doing the things you’d expect from a steadfast lefty, protesting against all the Liberal Party’s favoured nostrums – on refugees, funding of public services, law-and-order, the republic, the war on drugs, Palestine, Collaery, Assange. And so on.

But the Liberal Party is where he began. Like Malcolm Fraser, he insists that the party has changed but he hasn’t.

“At Monash University, one of my majors was political philosophy, and I was attracted to liberalism, as opposed to conservatism. When I joined the Liberal Party, it was a much broader church where MPs would cross the floor with regularity and the liberal wing of the party was very active.

“That remained the case until John Howard became leader in 1995.”

For a decade, starting in 1989, he was a party staffer – first for the Premier of New South Wales, Nick Greiner; then Alan Brown, the opposition leader in Victoria; then for Ray Groom, Tasmanian Liberal Premier. And for three years, he was chief of staff to John Fahey, Howard’s finance minister.

That ended when, in 1999, he joined the Australian Republican Movement as its political campaign director in the pivotal fight for a referendum. In the dog days after Howard’s machinations “broke a nation’s heart”, Greg took over its leadership from Malcolm Turnbull.

The republic has always been a mainly Labor enterprise. Although there was some support from individuals in the conservative parties, the push for Australia to become fully independent was the creation of one man – Paul Keating. It was a dream of leftists, not of Tories. And it was Keating who, in 1993, appointed Turnbull as head of his Republic Advisory Committee.

“By the time I left the Liberal Party in 2002,” Greg recalls, “I had well and truly had enough. Tampa was the [decisive] issue. It was highly illiberal in so many respects, including in the suspension of the rule of law.”

The Tampa episode – and the demonisation of refugees that went with it – directly caused his split with the Liberal Party. He was disendorsed as the candidate for Denison in the 2002 Tasmanian state election after criticising the federal government’s asylum seeker policy. The message was clear: agree with Howard at all times, or go.

“Anyone who’s been a genuine liberal – people like Fred Chaney, Malcolm Fraser, Ian McPhee, Chris Puplick – is no longer a member of the party.”

And he has been acutely critical of members of the remaining Moderate faction who remained but “went along for the ride”. There were a lot of them – such as Daryl Williams, Robert Hill, Philip Ruddock, Amanda Vanstone, Christopher Pyne, Trent Zimmerman. They gained power and position, but at what cost?

If he felt betrayed by his former party colleagues, he found inspiration on the other side of politics.

“My heroes in the law,” Greg tells me, “are people like Michael Kirby, Lionel Murphy, Rob Hulls in Victoria was a great reformer; Don Dunstan – absolutely Don Dunstan – and Peter Duncan, who came in as [South Australia’s] attorney-general. And one has some hope that Mark Dreyfus might follow in that tradition.

“The role of lawyers should be social progress, not simply enforcing what has always been happening.”

THE SHARP END OF THE LAW

Criminal defence is one of the toughest and most disheartening jobs in the law. A large majority of Greg Barns’s clients are guilty. Many are frequent fliers, continually in trouble with the law.

They tend to have low levels of education and literacy, and come from the most disadvantaged communities. Many have serious mental health problems that drive their offending. More than a few are brain damaged.

But the justice system has only one solution: punishment and prison, rehabilitation not included. The most cursory look at the data shows not only that imprisonment does not work, but that the scale of its failure is getting worse.

In Tasmania, where Greg Barns practices, recidivism rates are soaring. The proportion of the state’s prisoners returning to gaol within two years has gone from 39.8% in 2015-16 to 50.4% in 2020-21. It’s by far the worst performance in the country.

The rate of serious prisoner-on-prisoner assaults has doubled in the past decade. The time prisoners spend locked in their cells is higher than in any other state. And it costs $475 to keep one prisoner in gaol for one day, one of the highest costs in Australia.

In Tasmania and Australia, more and more people are in gaol. In a decade, the average daily number went up by 30% in Tasmania and by 47% in the country as a whole.

Everywhere, prisons are overcrowded, treatment and education services are inadequate or non-existent, and the chances of rehabilitation are vanishingly small.

Despite all the evidence that high rates of incarceration benefit nobody, the merry-go-round continues.

“The law is political,” Greg said, “and those who tell you it’s not are kidding themselves. The law’s function is to uphold particular values in society and, often, those interests which are the most powerful.

“The areas of the law I work in – criminal defence and what I broadly call human rights work, administrative law – is where you see not only social inequity but also the political powerlessness of groups in the society. What you also realise is that process of law is inherently conservative.”

The theory behind criminal law, he says, is to use the example of punishment as a deterrent to crime and to protect the community from dangerous people.

“There are some people – a minority – who the community does need to be protected from, absolutely. But most of the people I represent in court are of no danger whatsoever to the community, and the safety of the public is in no way served by keeping them in gaol.”

Punishment as deterrent – the fear of being caught – doesn’t work either.

“The law assumes that all people make rational decisions, so increasing penalties for instance will make them think again before committing an offence.”

But the people the courts deal with all the time just don’t think that way, he says.

“I can assure you that my clients do not think: ‘Hang on, the courts have been handing down longer average sentences in recent years so if I go ahead and rob that bank, I might get eight to ten years. Perhaps I’d better not!’

“That’s not the way it happens and it’s just nonsense to go on believing that it does.”

A NEW GOVERNMENT AND A REPUBLIC

Within days of being elected, the new Prime Minister appointed an assistant minister for the republic. It was a symbolic, rather than a practical, move; but it renewed the long-lapsed debate.

If he finds little to hope for in the criminal law, Greg has serious hope in the revived campaign for Australia to become a republic. It would be, he says, the completion of Australia’s independence and coming-of-age as a nation. After the bitter disappointments of 1999, Greg is upbeat – ebullient, almost – about the prospects this time.

“There is genuine affection for the present monarch, and there has been no real prospect of proceeding while she is still alive. But Charles is not the person. He does not have his mother’s grace and charm. And he’s a controversial figure.”

For decades, the prospective King of Australia has been trailed by scandal and dispute – the Diana-Camilla affair, his role in the Whitlam government’s dismissal, his fringe scientific enthusiasms, cash for honours and a propensity to intrude into politics.

Only a minority of Australians want him as their monarch. The ABC’s recent Vote Compass found 53% did not support Charles becoming King of Australia, with only 35% supporting him. And 11% were undecided.

Greg wants a different decision process this time, with a convention that is more representative of the community, rather than the dominance of politics-and-law figures we saw last time.

A referendum on an indigenous Voice to Parliament must come first, he says, but a new referendum on a republic could be put within five or six years from now. So, by the time the decade ends, this country could be constitutionally and legally independent for the first time since 1788.