Climate change is already turning Australians into refugees. But it's only the beginning. 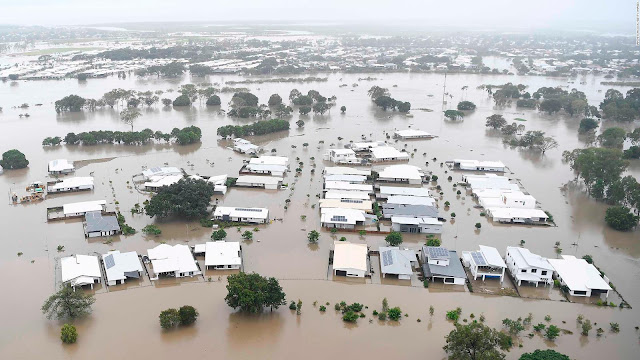 Over the next couple of decades, hundreds of thousands of people will have to find somewhere else to live.

Rebuilding Lismore would perhaps be possible. But rebuilding this many homes and businesses is not.

Many people will stay where they are, at least for now. They have little choice. But others have already had enough. The era of the climate refugee has arrived.

Nowhere can escape all the effects of climate change, but the risk is not spread evenly or fairly. So which are the worst areas? And where can people find somewhere that’s safer?

WHERE WILL THE REFUGEES COME FROM?

Research by the Climate Council has calculated that 520,944 properties across Australia will become uninsurable by 2030. That’s 3.6%, or about one property in every 25.

According to its report Uninsurable Australia, “worsening extreme weather means increased costs of maintenance, repair and replacement to properties – our homes, workplaces and commercial buildings. As the risk of being affected by extreme weather events is increasing, insurers are raising premiums to cover the increased cost of claims and reinsurance.”

Riverine flooding – such as the current floods in NSW and Queensland – is the most significant single climate-related issue risk to properties.

But other dangers – bushfires, coastal flooding and erosion, cyclones – add to the risks not only to property but to lives and livelihoods. A recent study shows climate change has already increased the risk of extreme bushfires – like those seen in NSW and Queensland over the summer of 2019-20 – by over 30%.

And as time passes without massive changes to atmospheric emissions, the effects of climate change are expected to occur more and more rapidly. 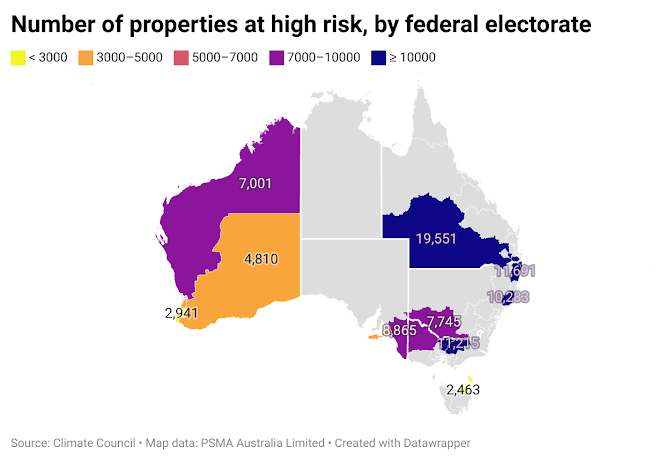 In the past three years, some 480,000 people have moved to Queensland from elsewhere in Australia. But of the 20 electorates identified by the Climate Change at greatest risk, 11 are in that state.

The map above does not show the smaller-area electorates in major cities. Of those 20 highest-risk electorates nationally, five are in Brisbane: This is what Brisbane would look like if sea levels rose by 1.5 metres. Seas won’t rise by that much for quite a few decades, but this map (and the ones following, compiled by Climate Risk Australia) does reveal the immense risk to low-lying areas of frequent flooding caused by a combination of river flows, tides and storm surges: Many thousands of people have gone to the Gold Coast, seeking a sunnier, happier life. If you’re thinking of buying a flat in one of the beachside towers in Surfers Paradise, it might be best to avoid the ground floor: 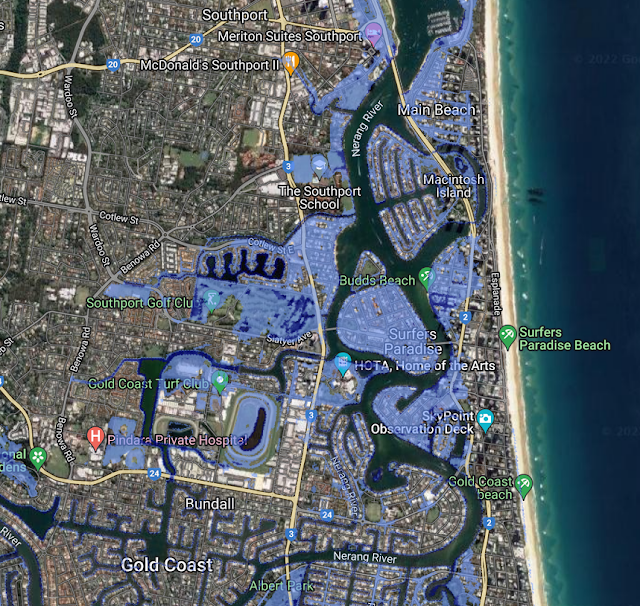 And this is Cairns: 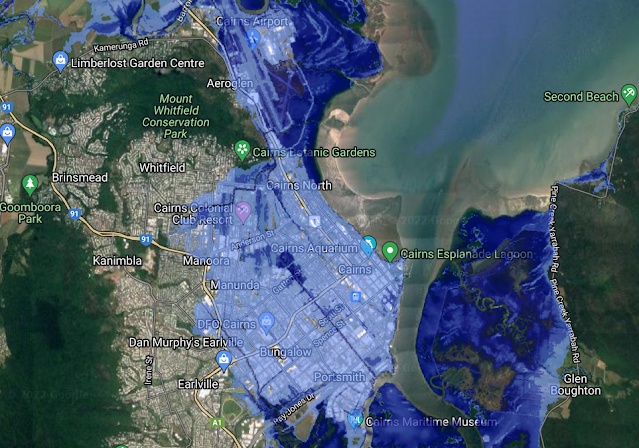 Tropical cyclones are predicted to become less frequent but much more intense and damaging. They will have higher wind-speeds, produce more rain, form more quickly, retain more strength after landfall, move more slowly and cause more coastal flooding. And they will occur further south than ever.

We can expect more cyclones of the intensity of Cyclone Yasi, which hit north Queensland in 2011, and Cyclone Tracy, which devastated Darwin in 1974.

Buildings can be designed to survive cyclones, but replacing so many structures in the most cyclone-prone areas is simply not possible. Many of those people will have to move.

WHERE WILL ALL THOSE PEOPLE GO?

Of the capital cities, only Perth and Hobart are likely to escape significant flooding. And all major cities are largely protected from bushfires, though their outskirts may not be. Very large areas of regional Australia are at risk of fires, floods, severe drought and unendurably high temperatures.

Large areas of Melbourne are at high risk of flooding. The map of the effect of sea levels 1.5 metres higher than they currently are – an indicator of occasional coastal flood risk – shows Port Melbourne and South Melbourne at particular risk, along with large areas of the bayside suburbs: In Adelaide, Port Adelaide, Semaphore, Largs Bay and Henley Beach would be under water in this scenario.

Launceston, built on a flood plain, is protected only by 12 kilometres of levees up to four metres high. But these were built without climate change in mind: in the past three annual reports of the Launceston Flood Authority, climate change did not rate a single mention. And levees can make matters worse. When floodwaters overtop levees, the damage can be far greater with them than without them. Once the water leaves the river's course, it can't get back in.

WHERE WILL THEY ALL LIVE?

There has been little or no planning – or even discussion – on the effects of climate change on internal migration, or on how to house the people who have to move.

The Real Estate Institute of Western Australia says there’s a current shortfall of around 20,000 dwellings. And the state government expects an extra 150,000 people to migrate to WA over the next four years. As climate change bites ever harder, that rate can be expected to increase. Where will they all live?

Hobart is already the least-affordable capital city for renters. Families, some with young children, who have been forced out of their homes by cost are spending the winter in tents. As more people from interstate move to southern Tasmania, the same question arises: where will they all live?