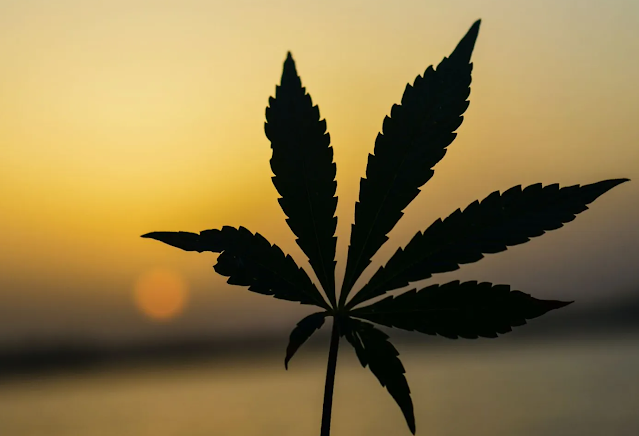 Many powerful interests – police drug agencies, mafias, bikie gangs, law-and-order politicians – base their business models on continuing the war on drugs. Voters, though, have a different idea.

Only a decade ago, the community supported policies that made drug possession a criminal offence. New data shows a dramatic shift from punishment to treatment, from harsh sentences to minimising harm.

BUT THAT WAR IS ALREADY LOST

“Australia cannot arrest its way out of this problem,” wrote former police officer Vern White. He was writing for the Australian Strategic Policy Institute, hardly a bunch of left-wing, dope-smoking ferals.

“In 32 years of policing and more than seven years in public service and research, I have rarely seen anything like this [level of policy failure]. No matter the problem, the resources dedicated to this growing problem are not making much of a difference.”

A swag of new data from the Australian Institute of Health and Welfare reveals how detached from reality our drug laws have become, and how little support they have in the community.

According to these figures, around 2.4 million Australians use cannabis, 600,000 use ecstasy and 900,000 use cocaine. Present laws turn a substantial part of the population into criminals. Despite all the dramatic arrests and well-publicised seizures, consumption remains steady: 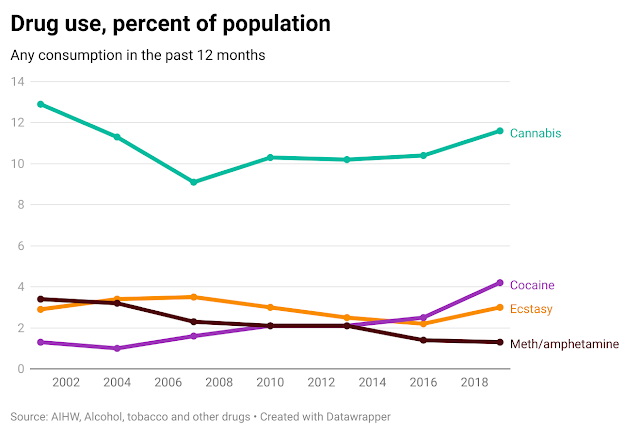 Contrary to the popular view, illicit drug use is not the pursuit only of young people. Look at the use of cannabis, cocaine and ecstasy among people well above 30: 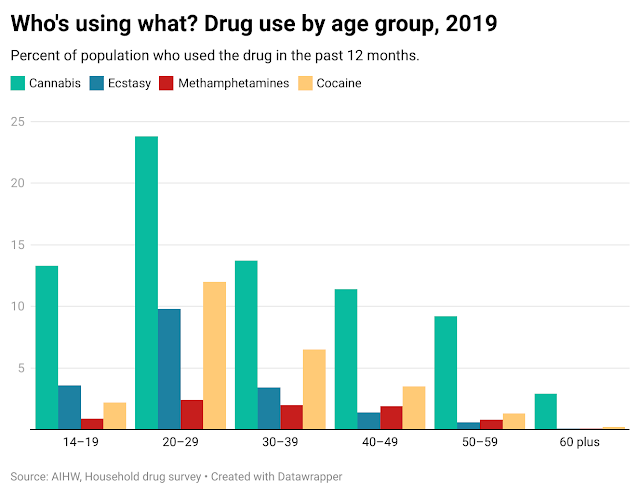 Interestingly, given the level of media attention being given to cannabis, and the more relaxed attitudes of courts and the community, use has not increased over the past 20 years and in some jurisdictions has fallen substantially. 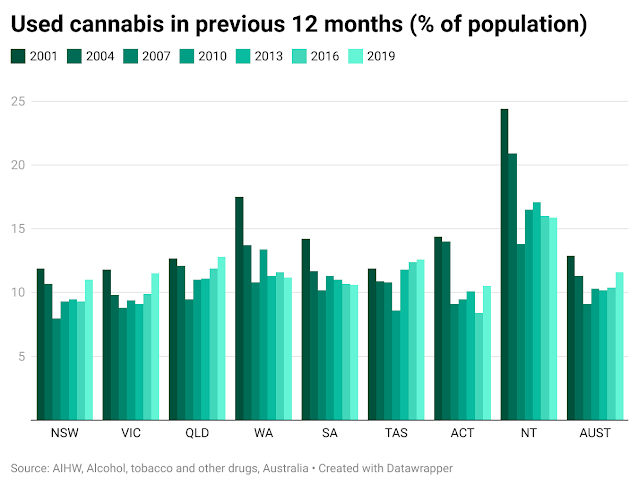 THE COST OF THE LOSING DRUG WAR

Drug law enforcement isn’t cheap. The direct costs of all those police and lawyers was calculated at $1.05 billion in 2009-10. In today’s dollars, that’s $1.3 billion.

Prohibition almost inevitably produces organised crime, and that costs far more. The Australian Institute of Criminology estimated that the involvement of organised crime in the marketing of illicit drugs cost the economy $10.6 billion in 2020-21.

Prohibition pushes prices up to astronomical heights, and about $6 billion of the total went into the money paid by users to criminal gangs. Medical care – often as a result of unsafe injecting – accounted for another $900 million. And lost output – users in treatment, or who are dead, can’t contribute to the economy – cost another $450 million.

All of that was money lost to the productive economy.

The human cost of disease, disability and death as a result of unsafe drug use is not included in those figures. Opioid deaths, particularly, could be massively reduced by providing more safe conditions. Opioids, by themselves, can be used relatively safely, but drug injection massively increases risk. That increased risk can be seen in the death rates for both opioids and benzodiazepines (downers) 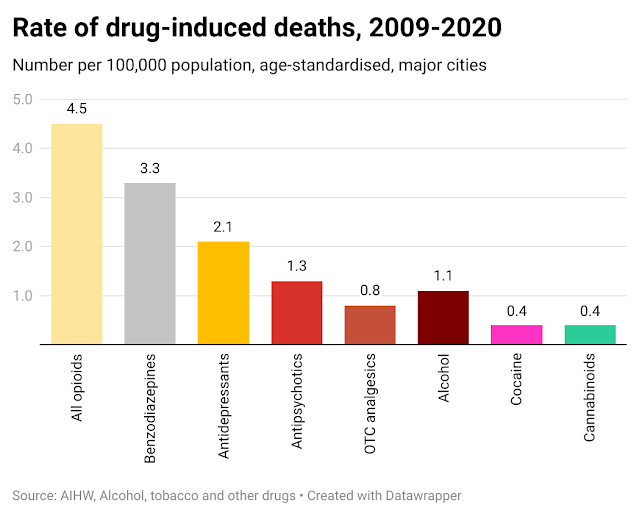 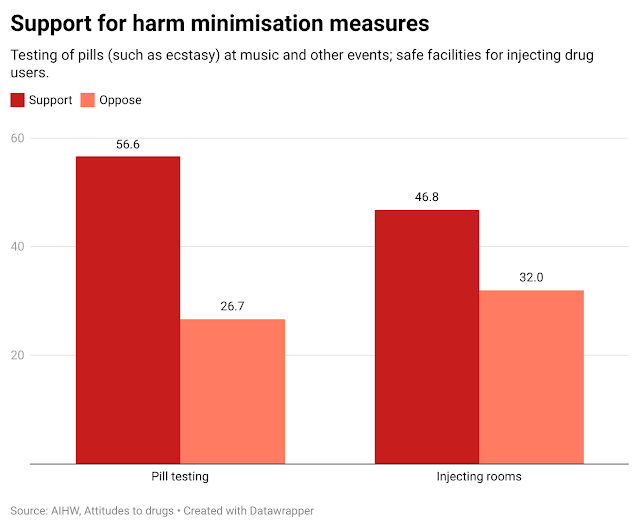 Community support for legalising cannabis has risen steeply over a decade, with 41.1% in favour and 37.3% opposed. In 2010, 55% opposed legalisation.

Support for legalising cocaine and ecstasy, though still very low, has also increased. 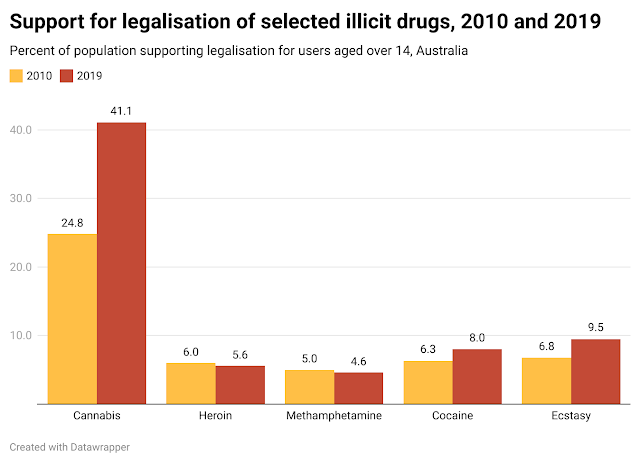 Support for removing simple possession of cannabis out of the criminal law altogether is now overwhelming in all states, climbing as high as 83.2% in Tasmania. The trend in support for harm minimisation, rather than punishment, is dramatic. 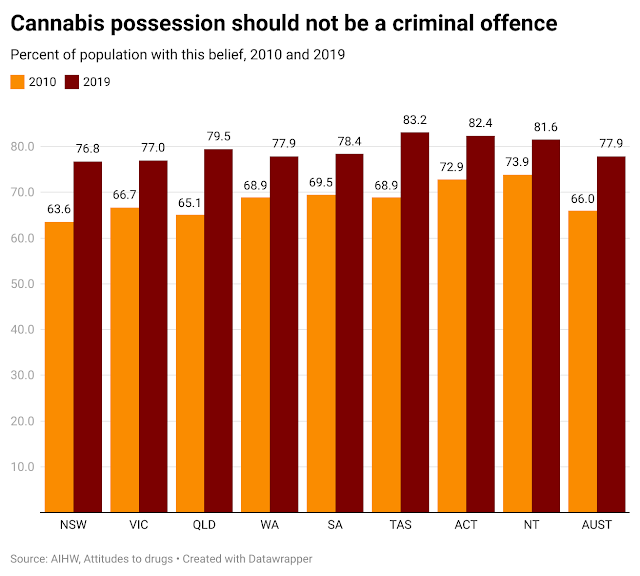 But the trend is evident across the range of illicit drugs. Even for heroin and methamphetamines, a strong majority (56.9% and 54.9% respectively) favour referrals for treatment and education, warnings and no action over prison sentences. 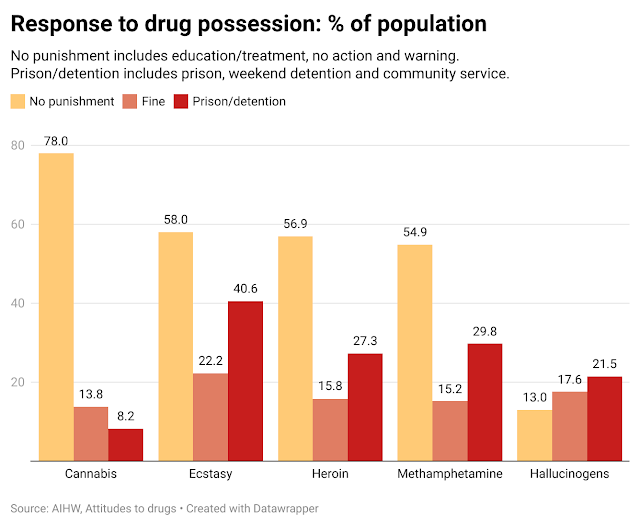 Anomalies remain in these attitudes, indicating the need for more and better public information: there is no evident reason why users of hallucinogens should be punished more than users of other drug classes. And why should ecstasy be met with more criminal punishment than heroin or methamphetamines?

Tolerance does not extend to suppliers, except perhaps in the case of cannabis. But there is room for much more nuance here. Should someone selling small amounts to support their habit be regarded as equivalent to the boss of an international syndicate? 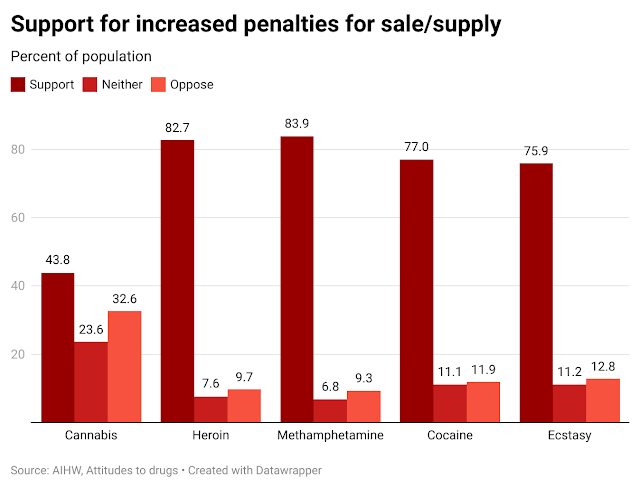 THE LAW IS MOVING. SLOWLY.

Across Australia, laws on simple possession of cannabis are being reformed. For this single drug, public pressure for change has finally produced some change.

Decriminalisation – keeping the offence on the criminal statutes but imposing treatment rather than prison – is now in place for cannabis in South Australia, the ACT and Northern Territory. Civil, rather than criminal, penalties apply.

Other states have yet to move on the issue. The Victorian and NSW government have ruled out decriminalisation, though diversion programs are moving more into favour.