Census delivers a big budget windfall to the small states.

Almost $900 million will be transferred this financial year from the biggest states to the smaller jurisdictions. And Victoria will lose the federal seat it recently gained.

There's one simple reason for that. The big states have fewer people than was thought. The small states have more. When the federal government is handing out its $180 billion a year in grants to the states, that matters.

The upshot is that this year alone, Western Australia will get an extra $390 million, South Australia $175 million, Tasmania $160 million and the ACT $131 million. The losers will be New South Wales, down $215 million; Victoria down $609 million; and Queensland down $653 million.

Every three months, the Australian Bureau of Statistics issues its latest population estimates. But that’s just what they are – estimates. And every five years, at census time, the estimates are mugged by reality.

This time, the difference between how many people the ABS thought lived in each state, and the actual census numbers, were wider apart than usual. The two biggest states had  smaller shares of the total population than had been assumed, and the others – Western Australia, South Australia, Tasmania and the ACT – had more. For all government budgets, the ABS population figures are crucial. Most importantly for the states, they determine how much Commonwealth funding – in the form of GST and specific-purpose funding for health, education and so on.

Special-purpose funding is the simplest, so let’s look at that first. Tied grants for state-run services like public hospitals, schools, roads and so on are distributed on a strict per capita basis.

GST is a bit more complicated. It too is based on population numbers, though the Commonwealth Grants Commission uses a three-year moving average. And they adjust it further to take each state’s different needs into account.

The 2022 federal budget estimated that specific-purpose funding (SPP) would amount to $80.6 billion during 2022-23, and GST revenue to $80.3 billion. On the basis of the ABS’s revisions to population data, we can make some fairly robust estimates on what each state will now gain or lose. 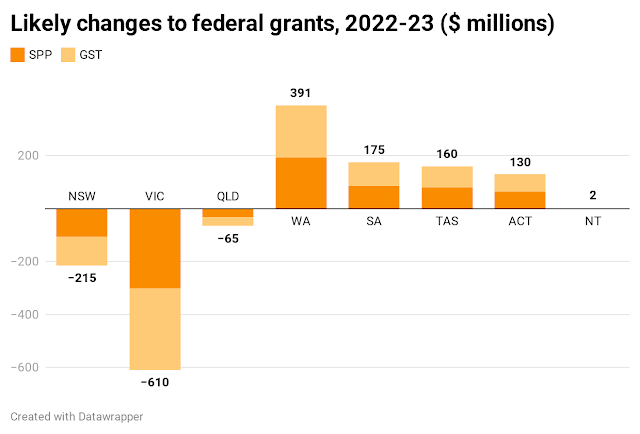 The totals are shown in this table:

There’s something else to consider. A windfall of, say, $100 million can mean a great deal to a small jurisdiction like Tasmania or the ACT, and not much to one of the big ones. The real significance of the changes, in terms of budgetary boost, is best seen in the per capita figures. From these, we can see that the biggest winners are people living in the ACT, followed by those in Tasmania and Western Australia. And on a per capita basis, even Victoria is losing far less than the ACT or Tasmania is gaining

There’s a further complication, and it’s not about money.

After every federal election, the Australian Electoral Commission works out whether electorate boundaries, and the number of seats allocated to each state, need to change. To do this, they look at the latest population estimates from the ABS.

In the last redistribution, Western Australia lost a seat and Victoria gained one. The census now shows this was a mistake based on inaccurate data, and is likely to be reversed at the next redistribution in a little over a year from now.

Most House of Representative electorates have about 95,000 voters. (In Tasmania, which is guaranteed five seats by the constitution, each seat has only about 70,000). So Western Australia is highly likely to get back the one it so recently lost to Victoria.

This table shows the number of House of Representative seats in each state, as well as its new entitlement, using the Electoral Commission methods.

As we can see, Victoria has a theoretical entitlement to only 38 seats, not its current 39. Western Australia clearly needs that seat back and is highly likely to get it. And if New South Wales’s share of the national population goes down any further, it will also be vulnerable to losing a seat.

The Victorian – WA case, in particular, represents a significant failure of the electoral system. In WA, the Liberal-held seat of Stirling was abolished; its member, Vince Connolly, stood in the Labor seat of Cowan and lost.

In Victoria Sam Rae, the ALP’s former state secretary, was elected in the new electorate of Hawke, on the outer fringes of Melbourne.

Will that electorate now be abolished after only one term? If not that one, then which?

And where will the new WA seat go? Will it be notionally Labor (like Hawke) or notionally Liberal (like Stirling?)

Labor experienced a landslide in WA, so Stirling – if it had continued to exist – would probably have gone to the ALP at this election anyway. Booth-by-booth results indicate Labor would have won Stirling convincingly.

But that's not the point. In any election, these things matter. In a close election, they can determine which government leads the nation.