For the past 50 years, governments have taken money and resources out of the mental health sector. Now, we have a ballooning crisis that disproportionately affect women, the poor, the young, and homosexual men and women.

The old Victorian psychiatric hospitals – lunatic asylums, as they had been – had long outlived their time. They were unjustly seen as prisons where people were incarcerated and neglected rather than treated and cared for. They had a very bad press – thanks, partly, to the hit American movie One Flew Over the Cuckoo’s Nest.

And they were expensive.

The fashion changed from one extreme to the other – from centralised, specialist hospitals to care in the community, with a depleted rump of psychiatric services in general hospitals. Sometimes, it has worked. But it has let far too many people down, with catastrophic results.

Governments, though, saved a lot of money.

Now, with the release of a huge new survey by the Australian Bureau of Statistics – combined with other new data from the Australian Institute of Health and Welfare – we can put together an unprecedented picture of the dire state of this country’s mental health.

SOME MORE THAN OTHERS

This story is complex. Each statistic – and there are many – represents a chronicle of pain that radiates out from the centre to touch the lives of others.

·       Affective disorders are about mood: depression, bipolar, obsessive-compulsive disorder and so on.

The rates are astounding, particularly among the young and among women

But this is a story best told visually, in charts rather than bald figures. A basic measure of the nation’s mental state – psychological distress – reveals a pattern seen throughout the data. The burden is huge, and largely borne by the young and by women. 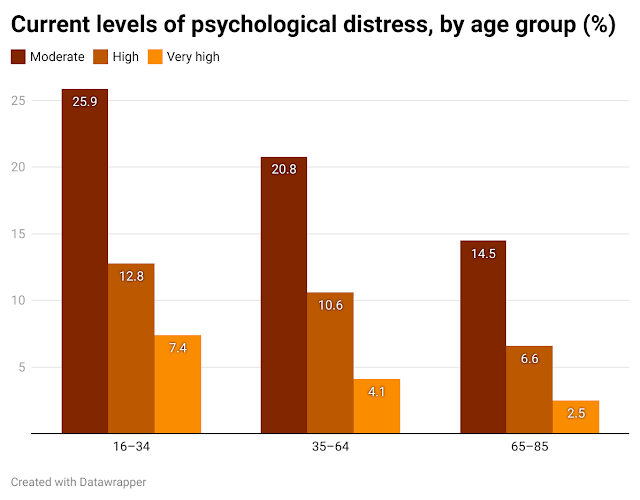 It’s perhaps not surprising that unemployed people are almost twice as likely to have mental health problems as those who have jobs. 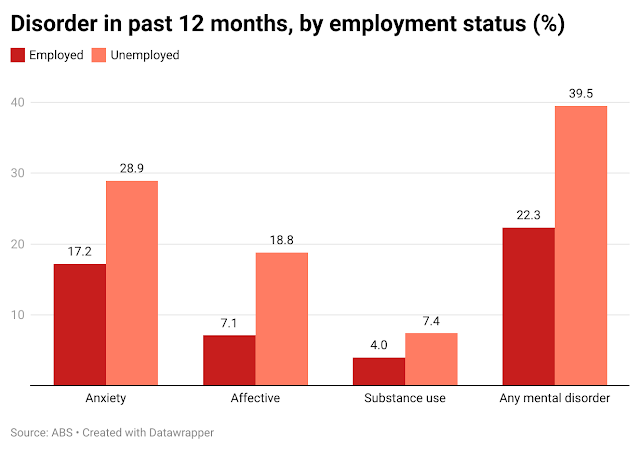 Anxiety and mood disorders – though not substance abuse – particularly affects people on lower incomes. But the well-off aren’t immune either. And despite the stresses associated with migration, people born overseas have significantly better mental health than those born in Australia by a factor of two to one. One factor here may be a difference in culture: many migrant communities are tight-knit and supportive of one another. Nowhere, though, are there such astounding levels of mental health disorder as among gay and lesbian people.

Homosexual people are 172% more likely to experience a mental health disorder than the general population. There’s a 187% difference for anxiety-related disorders, 362% for affective (mood) disorders, and 145% for substance disorders.

Mental health issues – particularly depression and bipolar disorder – can be fatal, particularly if they are under-treated or untreated. ABS data show that in 2019 alone, 3,318 people took their own lives. Of these, 755 were female and 2,835 were male.

This statistic, however disturbing, masks a much larger toll of emotional distress. One person in every five aged between 18 and 34 had considered suicide at least once at some point in their lives; one in ten had developed actual plans to kill themselves; and over one in twenty had attempted suicide. 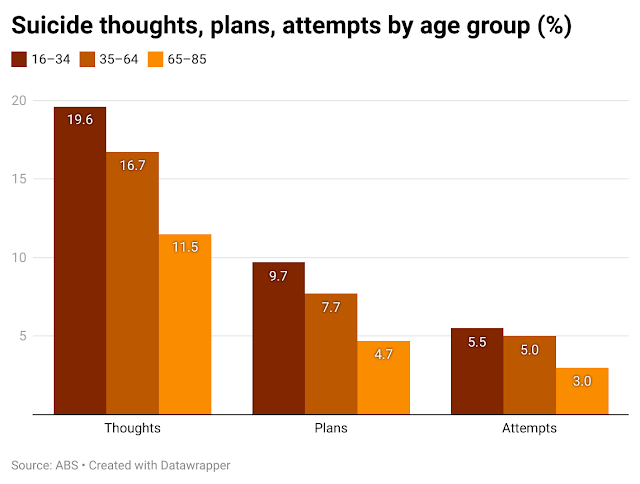 The impacts of suicide are widespread. There is an inevitable load of grief, loss and stress which takes its own toll on the mental health of families and friends. About a third of all Australian adults have known someone who has died by suicide; disturbingly, the figure is highest among younger people who, by definition, have had less time to have this experience. 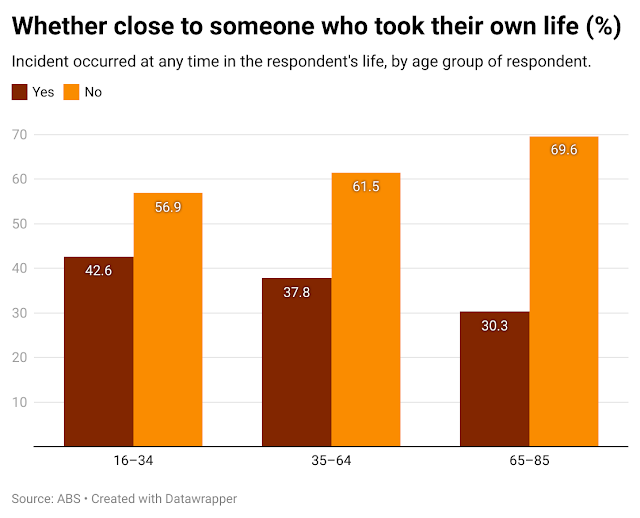 Almost all mental health services are publicly funded, with the federal government as the dominant funder. In 2019 the Commonwealth paid for 60%, the states 35% and private insurance for 5%. 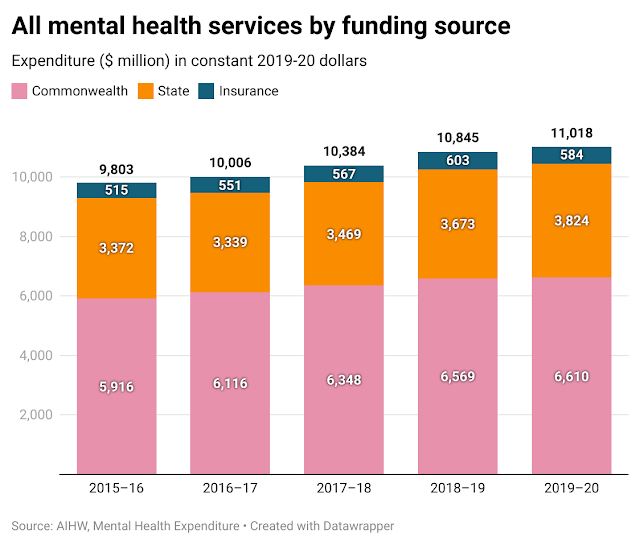 Funding for mental health services has been around 7.5% of all health funding for the past 20 years. Inflation-adjusted funding has grown faster than the population, but not as fast as demand. Mental health services, like the health sector generally, have had to do more with less. Inevitably, there is an impact on care.

Acute inpatient care, whether for physical or mental conditions, is expensive. Inpatient mental health care for children and teenagers is the most expensive of all. General (adult) patients cost about half as much. And community care – outpatients of public outreach services and clients of autonomous services like Headspace – are cheaper still. A young person in a hospital bed costs over seven times as much as someone receiving community-based treatment. 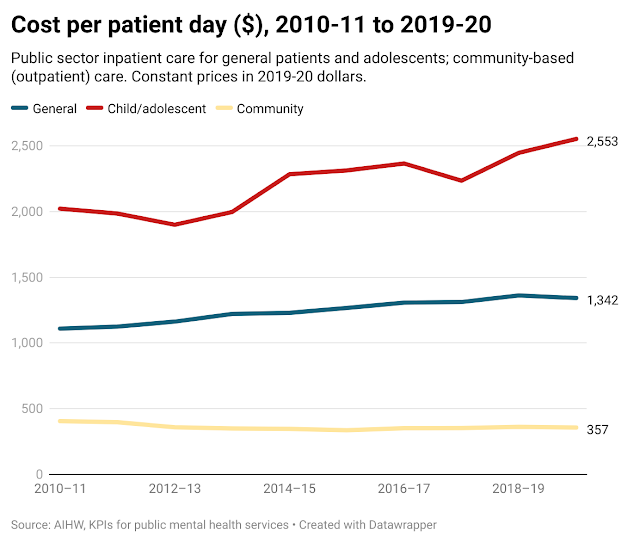 States and territories are responsible for most hospital-based and for many community-based treatment and residential services. As the following chart shows, this funding has been trending down for most of the past 20 years. The result is an ever-tightening squeeze on these services, with inevitable downgrades to quality and capacity. 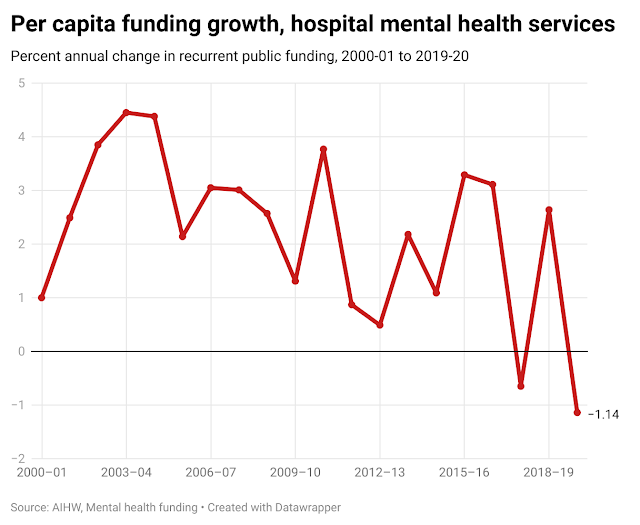 Inpatient services are largely confined to people in acute crisis. Over half are admitted on an involuntary basis, typically because they present a danger to themselves or others. But, under increasing pressure, inpatient units have been forced to reduce lengths of stay. 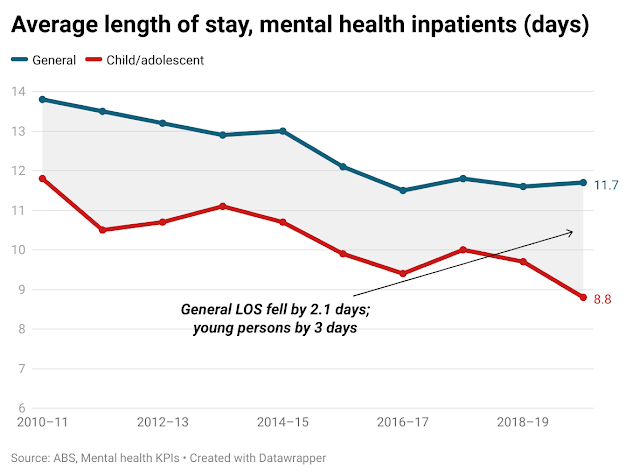 When people with serious mental illness reach such a state of crisis that they must be admitted to hospital – often against their will – a stay of a week or two is often nowhere near enough. The need for longer treatment is reflected in the numbers for people who either do not improve during their time in hospital, or whose condition is worse after discharge than on admission. Again, it’s worse among the young. 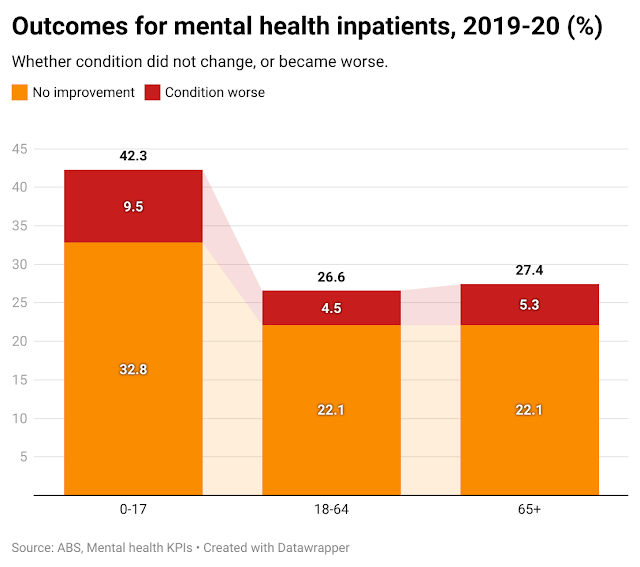 Since the closure of the old psychiatric hospitals, residential facilities – many of them run by charities – have boomed. They come at a fraction of the cost to government.

There is no serious doubt that a large proportion of people with mental health disorders are most appropriately treated outside of hospital. The real question is whether we’ve got the balance right, or whether policy has been unduly driven by cost rather than care.

But even residential care has been cut back. Expenditure by NGOs fell by 7.3% in real terms in the five years to 2019-20. This is directly reflected in residential bed numbers: the boom is over and is in danger of turning into a bust. 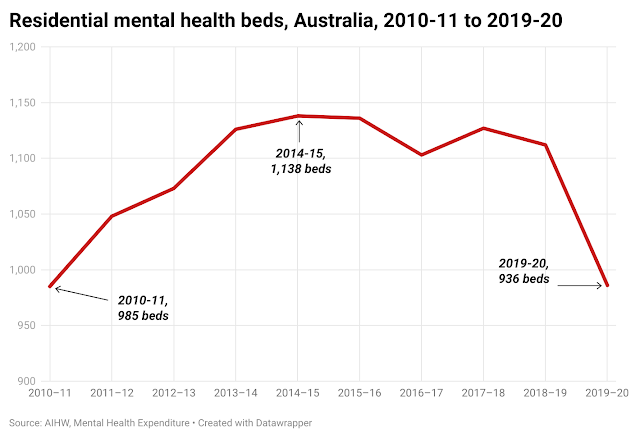 IN PRISON OR ON THE STREET

When the old psychiatric hospitals closed, thousands of people around Australia found themselves without the care they need. Most people with mental health issues do not need longer-term institutional care. But some do.

The human impact of the removal of adequate institutional care for people with complex needs can be seen in prisons and among the homeless.

The AIHW has reported that 40% of prison entrants have a previous history of mental illness; 20% of deaths in prison were from suicide; another 20% of entrants had a history of self-harm; they are prescribed medication for mental conditions at twice the rate of the rest of the population; and many have brain injuries, which can result in personality change and criminal behaviour.

Two-thirds reported using illicit drugs within the past year, and the choice of drug is critical: prisoners preferred methamphetamine (such as ice, or crystal meth); in the broad community, the dominant illicit drug is cannabis.

Among the homeless, there is a similar story. Nationally, the rate of current mental illness in the general population is 11%; for the homeless, it is 56%. This is how it plays out around the country: 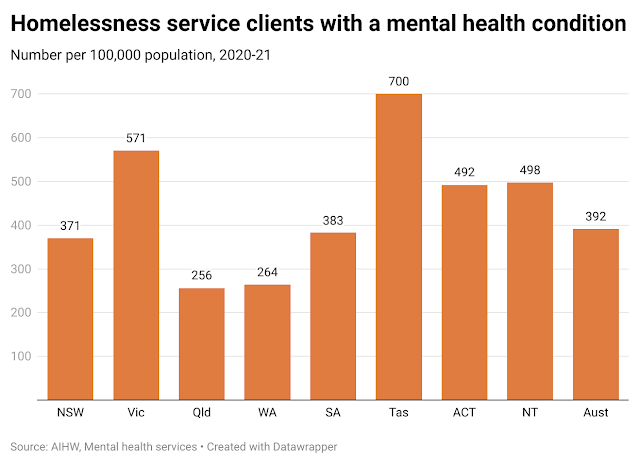