Could the Greens (one day) govern Australia? Bob Brown is pretty sure about it. “It’s inevitable,” he told me. Bob, and many within the Greens, see environmental policies – on climate change particularly – as being the single decisive issue around which future politics will revolve.

“The Greens job – and the teals – is to replace more and more of the old parties because they cannot change,” he said. “They are captured by the corporate sector.”

Major parties, in Australia and in many other democracies, are in trouble. At this year’s federal election, the ALP won government with only 32.9% of the primary vote and the Coalition got 35.7%. For both sides, it was the lowest primary vote in the House of Representatives ever. 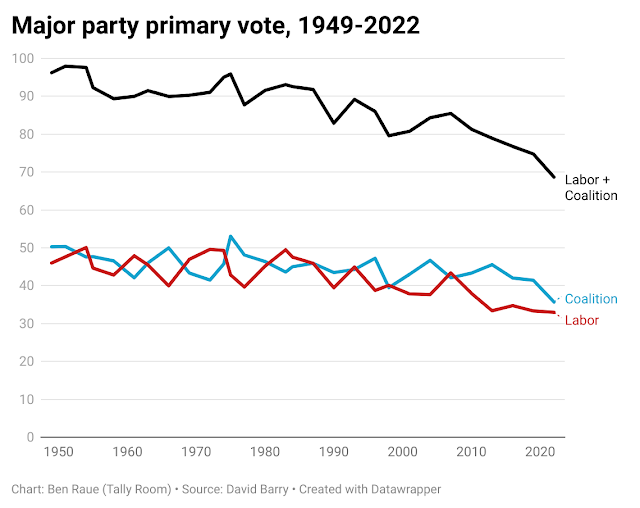 As support leaves the majors, the Greens are heading in the other direction, from 7.19% in 2004 to 12.25% this year. It’s heading higher in the regions as well as in the cities, though metropolitan support is growing somewhat more quickly. 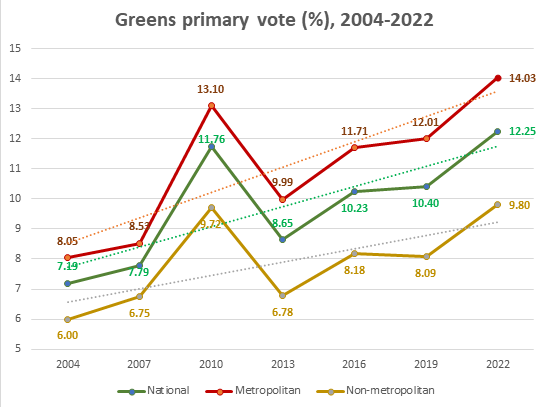 With the exception of NSW, support is relatively even across the country. In Queensland, Western Australia and the Northern Territory – often seen as hostile to the Greens – their vote was above the national average. And, in the absence of prominent teal candidates, three new Greens MHRs were elected in Brisbane. If the current trajectories continue – of major party decline and Green increase – they could intersect by about 2040. The Greens would then have to be regarded as a major party but would still have great difficulty in forming government on their own. Coalitions, in some form, would be the way Australia was usually governed.

“There’s a movement on,” said Bob Brown, “that I haven’t seen the likes of since the sixties when the world was changed forever by what was called then the flower-power people. It translated into a social as well as an environmental revolution; and of course materialism swallowed it up in the end but didn’t reverse those changes.

“There’s now the challenge of a reality that is frightening more and more people.”

The future of the Greens – and Bob Brown’s optimism – rest, he believes, on young people with progressive ideals, and who will have to live with the realities of climate change.

It’s true that the electoral fortunes of the Greens depend largely on the young, and young women in particular. The last Essential Report survey before the election showed both the strengths and weaknesses of that support. Take the vote of young women out of the equation, and the picture looks much less rosy. Young men and anyone over 35 tend not to share the enthusiasm. 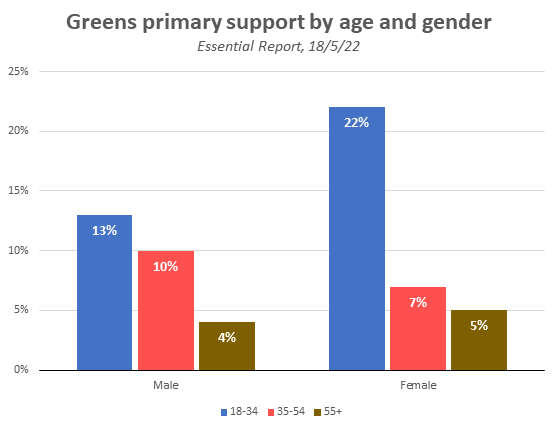 At a national level, Green parties are in government in six European nations – Austria, Belgium, Finland, Germany, Ireland and Luxembourg. But nowhere does it hold government in its own right, and nowhere is it the senior partner in a coalition.

This graph shows the trajectory of support in various elections over the past 20 years. Across Europe, it has risen in that time from 4% to 10% and, in Germany’s case, from less than 1% to 14%. 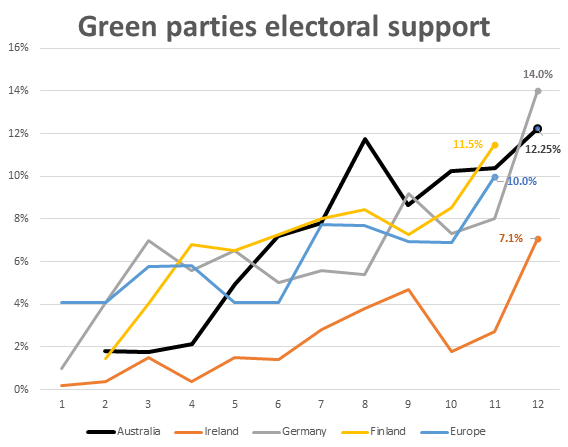 COALITIONS AND THEIR DISCONTENTS

The fate of smaller and emergent parties such as the Greens depends on the electoral system under which they have to operate. The Australian result of 12.25% compares well with their European counterparts but – even now – has delivered only four House of Representative seats out of 151. Other parties, with less support but more congenial electoral systems, are regular members of governing coalitions. In Finland, they have been in government for 18 of the past 27 years.

In Britain, the United States and Canada, the Greens remain parties of protest on the margins of politics.

First-past-the post electoral systems, like those in Britain and the United States, entrench a two-party system and make it almost impossible for new groupings to emerge. Single-member preferential systems, like Australia’s, are not much different.

Systems that attempt to reflect the level of voter support attracted by each party in the number of seats they are allocated – such as those in many European countries and in New Zealand – are much kinder to small parties. In these countries, the Greens often find themselves in governing coalitions. That is now the case in New Zealand.

Systems like this are fairly common in Australian upper houses – the Senate and the various Legislative Councils – but not in lower houses where governments are made. There are two exceptions worth looking at – the single-house ACT parliament and the Tasmanian House of Assembly. Both use the multi-member Hare-Clark electoral process.

The Tasmanian Greens have been in partnership with both major parties, reaching support agreements with Labor in 1989 and the Liberals in 1996. These did not involve Greens members formally joining the government. That changed in 2010, when Greens MHAs were appointed to ministries in a Labor-led government. 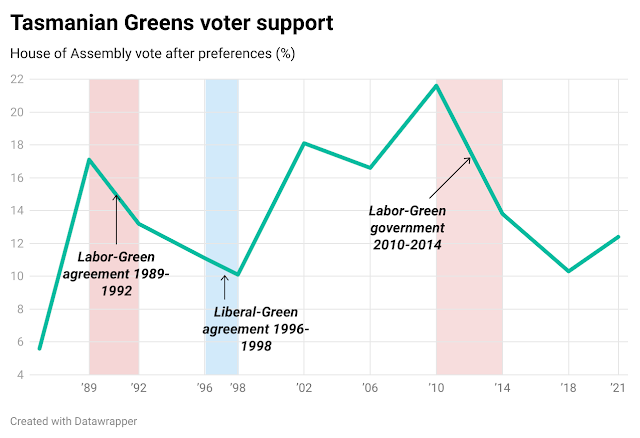 In each case, the experiment ended badly, with a collapse in Greens support at each of the following elections. The biggest disaster for the Greens came with joining the Labor-led coalition in 2010. The party entered that period with five members in the House of Assembly and gained two ministries – Education and Human Services – and a parliamentary secretaryship in Health.

But they continued in government even after the Labor Premier and Treasurer, Lara Giddings, introduced a highly unpopular slash-and-burn budget in 2011. That budget, which inflicted major cuts on government services, ensured the end of Labor’s period in government. And at the subsequent election in 2014, the Greens were punished even more heavily than Labor, losing three of its five MPs.

There was a similar experience in the ACT. The Greens supported a minority Labor government after the 2008 elections without entering formal coalition. The punishment came in 2012, when their support plunged from 15.6% to 10.8%. Formal coalition then began, with the Greens support falling again in 2016. Since then, though, support has rebounded strongly, possibly reflecting an electorate increasingly at ease with a government generally seen as competent and responsive. 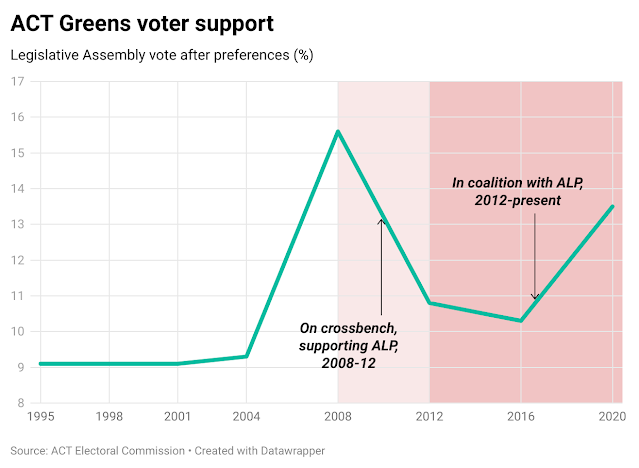 But politics in the ACT is different from anywhere else. It is by far Australia’s most left-leaning jurisdiction, with no significant rural population, a highly educated urban society and a fundamental dependence on the public sector.

The experience at the federal level emphasises the risk of coalitions to junior partners in a coalition or support arrangement. The Greens’ Adam Bandt and three independents kept the minority Gillard government in power after the line-ball election of 2010 but only one independent, Andrew Wilkie, survived the process with his voter base intact. The other two independents, Rob Oakeshott and Tony Windsor, lost their seats and the Greens’ national vote fell from 11.8% to 8.7%.

WILL WE STILL BE US?

Power always comes at a price.

Bob Brown, having taken part in three support arrangements with the major parties, today doubts the wisdom of the Greens entering coalition again. “The danger [we must avoid] is that the Greens, the teals, the alternatives coming up, being captured by the same [corporate and special-interest] forces,” he said.

It is probably impossible for any party to remain unchanged when it enters a coalition as a junior partner. As a former Greens MHA in the ACT wrote recently, that has certainly been the experience there.

“Being in government has clearly changed the ACT Greens,” Caroline Le Couteur  wrote recently. “Our policies have become less idealistic and more able to be implemented and closer to our majority partner ACT Labor … Partly this is capture by the ALP, partly it’s recognising the practical issues of governing. It has led to some people leaving the party and others joining. It has led to paid staff instead of an all-volunteer organisation. Voting for the ACT Greens has become voting for the status quo, or voting against the Liberal Party, not a protest vote seeking change.”

Bob Brown put it this way: “It’s better to stay out of government than to find yourself in a government which is going to think it’s business-as-usual and you have to fall in line. That’s why the Labor Party keeps stating that it will never go into an arrangement with the Greens again because they are terrified of sharing the power that the people want them to share with an environmentally and socially progressive party like the Greens.”

If a coalition is contemplated, he said, a hard-headed approach is essential.

“The Field Labor government in Tasmania in 1989 conceded a doubling of the size of the World Heritage Area as part of taking government. They would never have done that.”

Bob Brown’s hope is for a new political paradigm in which environmental issues trump all others and that the present major parties implode into one another.

“I would see the logical progression into the future is for a Liberal-Labor-National coalition on one side and the Greens, the teals and [like-minded others] on the other side. I think that’s where the fault-line is in the future of politics here and around the world.”

It’s a view unlikely to be widely shared. The environment is not now, and never has been, the major issue deciding any election. Even if it became so in the future, there are still too many other issues on which the Greens have so far failed to prove their competence to the Australian public.

Assuming that teal independents would join a Greens-led government is, at best, a stretch. The Greens are firmly on the left of Australian politics; apart from climate change and some social issues, the teals align much more with the centre-right. They have not yet had to answer hard questions about economic policy, foreign affairs, defence or the broad role of government in the economy.

When the answers to those questions finally emerge, as they must, the Greens might not feel quite so comradely as they do right now.

If the Greens are ever to lead an Australian government, they will have to – by definition – to become a major party first. But they would not be the Greens we know.