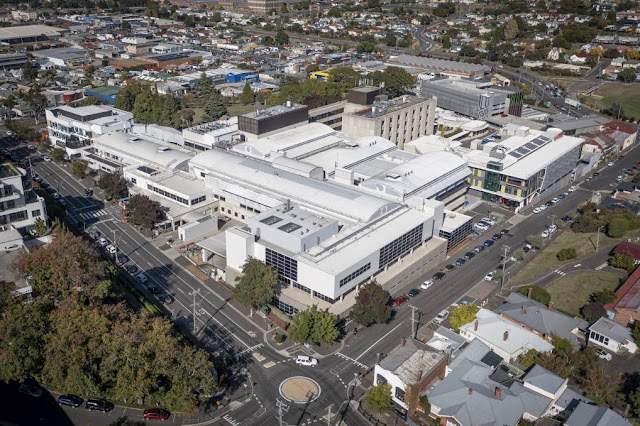 Every major hospital in the nation is in trouble. Most were struggling to cope with ever-rising patient numbers even before the pandemic pushed them over the edge.

But none are in a situation quite as bad as the Launceston General Hospital. On all the available evidence, this is the most overburdened major public hospital in the country.

It’s the main hospital for the whole of northern Tasmania, and the backup for the two smaller hospitals in the north-west. Together, that covers around half a million people.

Your local hospital might be bad. This one’s worse.

Although comparative data is limited, the information we have all show the extent to which the LGH was unable to cope adequately with demand even before the current wave of Covid-related admissions and staff shortages. And that’s despite Tasmania having only three Covid admissions in the whole state, compared with 3,622 in Victoria.

The single statistic which reveals most about a hospital’s capacity is the measure of bed block – that is, the time waited in the emergency department by patients needing admission to a specialist ward. This figure neatly quantifies not only what’s happening in the ED but, even more revealingly, the extent to which the whole hospital is able to deal with the patients needing treatment. When there are not enough beds and not enough staff, that statistic blows out.

The 90th percentile figure – the time within which 90% of patients have been admitted and 10% are still waiting – is the most commonly recognised benchmark. For many years, the LGH has consistently had the worst result of any public hospital in Australia. In 2020-21, that figure was 27 hours 52 minutes for the LGH, against a national average for all hospitals of 12 hours 57 minutes.

On 23 June last year the Health Minister, Jeremy Rockliff, said this in a media release: “We are delivering a record elective surgery blitz so even more patients get the surgery they need within the clinically recommended time.”

National data for 2021-22 is not yet available, but information released by the state Health Department show the situation has now deteriorated further. The official promises have not produced an evidently better result.

The most recent statistics on admissions to the Launceston General Hospital, for the financial year 2021-22, clearly show the fast-declining capacity of that hospital to meet patient demand.

For weighted separations (weighted for cost and complexity) the decline between the first and last quarters was 9.51%; and for Emergency Department presentations, it was also 9.51%. (A separation is defined as “a completed episode of admitted patient care” and is technically slightly different from admissions.) As the trendlines show, the decline was even across all three categories – fewer people presenting to the ED and fewer being admitted. These are the figures for each month:

For elective surgery admissions, the trendlines also tell the story, though with more nuance. Category 1 admissions – that is, the most urgent patients needing treatment within 30 days – actually rose between the first and last quarters by 8.93% over the period. But for the other two categories, there was a steep decline. Category 2 (90 days) admissions fell by 24.14% and category 3 (365 days) fell by 53.39%. 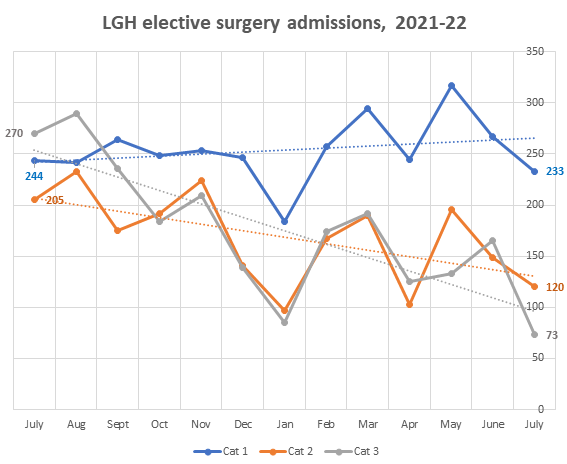 Total elective surgery admissions fell by 23.44% between the first and last quarters of 2021-22.

Figures from the Australian Institute of Health and Welfare show how elective surgery performance at the LGH has declined over five years. 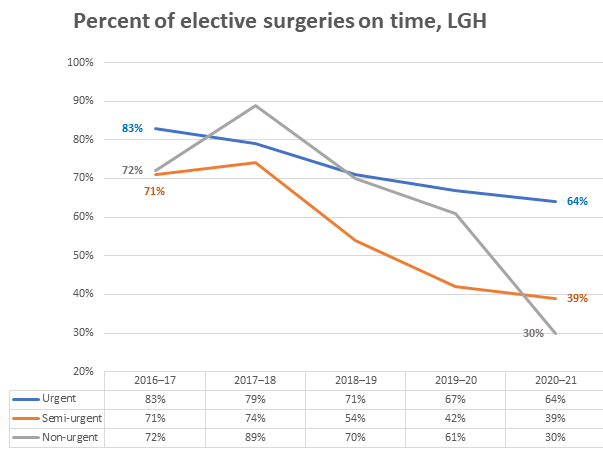 This table shows how the LGH compares with its peer-group of similar-sized public hospitals around the country. It shows the median waiting times for all three urgency categories and the proportion seen in the clinically recommended time.

The following graphs show the proportion of patients in four common procedures, who actually had their operations, who were on the official waiting list for longer than a year. For comparison, the AIHW also calculates the average figure for similar-sized “peer-group” hospitals around Australia.

Though the pattern varies somewhat across these procedures, two themes emerge: the consistently poor relative performance at the LGH; and the outsized deterioration in the first 15 months of the pandemic. 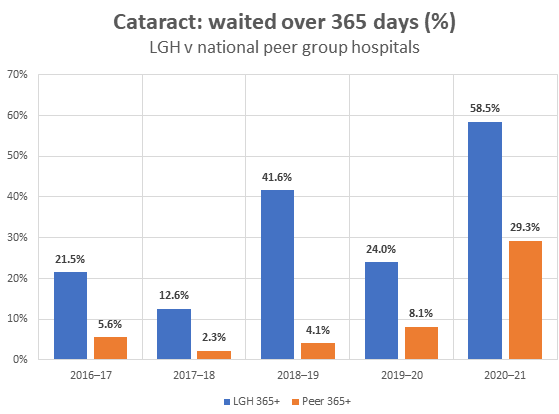 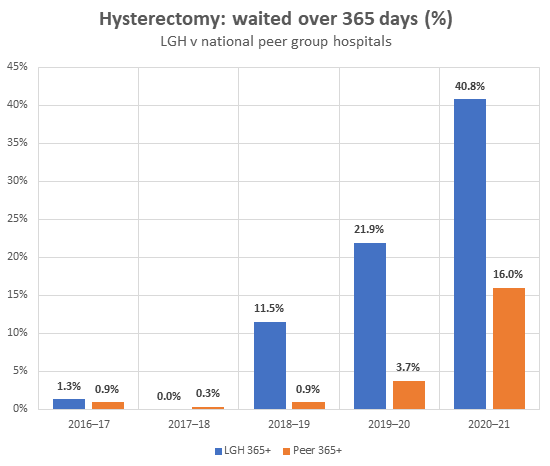 In the data on joint replacements, we can see the ultimate futility of redirecting scarce resources from other areas to boost the figures on elective surgery. These are often done in the form of general state-wide blitzes or, as here, more locally. It can make governments look temporarily better but, reality soon bites. These statistics clearly show the extent to which LGH staff are having to ration care. The most urgent cases – those who can’t be ignored any longer – are likely to be treated. Those with less urgent conditions are increasingly unlikely to be treated. In some cases, they may never receive their operations.

We need to remember that elective surgery is defined as any procedure that can be postponed for 24 hours or more.

People in the less-urgent categories include those with painful conditions: people with severe arthritis and in need of joint replacements who are immobile and in constant pain; people who are effectively blind because of easily-treated cataracts; people with painful and debilitating haemorrhoids; those needing gall bladder operations.

“Elective” does not equate to “optional”. In effect, though, that is what it has become.

The first graph – on total separations – shows that the problems are not related only to elective surgery but affect most, perhaps all, aspects of this hospital. Medical services tend to attract less publicity than elective surgery. The needs of patients, though, can be just as great.