Do our climate targets mean anything at all? 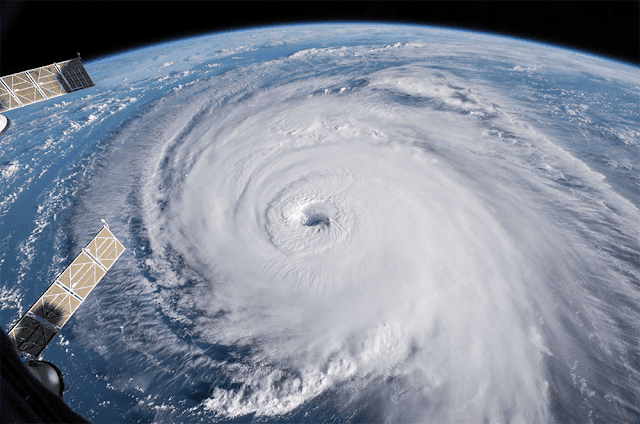 Reaching net-zero in 27 years looks near-impossible. It's going to take a hell of a lot more than getting rid of coal-fired power stations.

Almost every element of the economy will have to change. Cleaning up electricity generation is nowhere near enough. Planting trees won't save us either.

The climate scientists were wrong. Even the most pessimistic of them were not, as it turns out, pessimistic enough. The climatic shift is happening to us now, undeniably and irrevocably: stronger, nastier and sooner than we were ever told.

The earth has now warmed, since pre-industrial times, only by about 1.1 degrees. The climate forecasters now believe that limiting warming to 1.5 degrees is slipping from our reach. Perhaps two degrees is still possible.

But if this is what happens at 1.1 degrees, what would a two degree world be like?

HOW WE GOT HERE

The Industrial Revolution and its dark satanic mills have usually got the blame, but most of the damage has been done since the environment movement began in the 1960s, and when air pollution – at least in western countries – was brought under some control. Carbon emissions have risen by over 50% just since 1990, during the information age – and when climate scientists began warning about greenhouse gases. 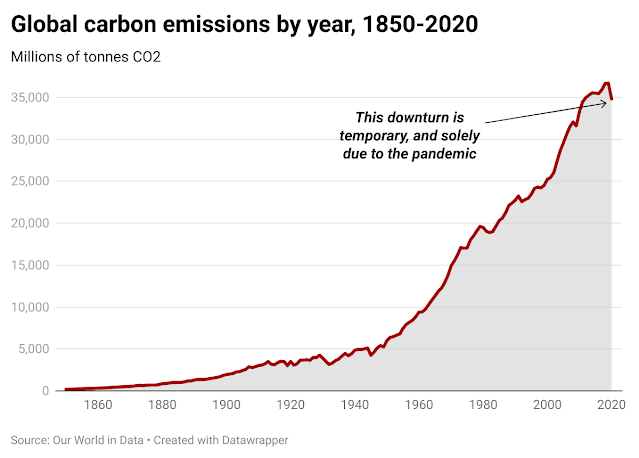 Since 2000, one country – China – has been responsible for 25% of the whole world’s CO2 emissions. Its transformation into a middle-income industrial society has rescued hundreds of millions of its people from severe poverty but it has come at price for China and the world. 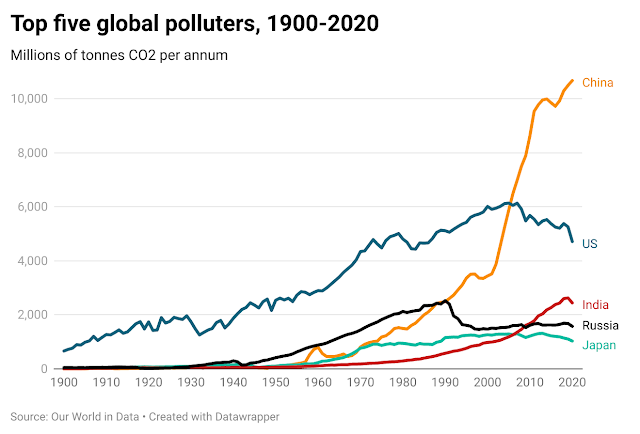 In 2019 China emitted more than twice as much CO2 as the United States and 325% as much as India. On the list of the carbon polluters, Australia ranks fifteenth out of the 195 countries of the world. 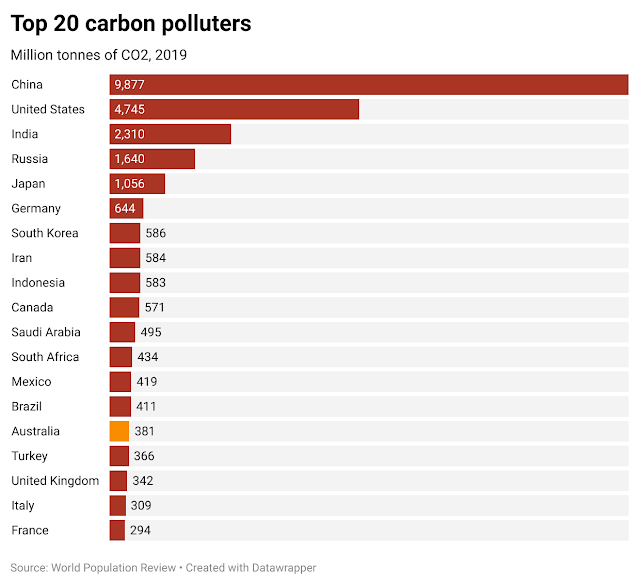 On a per-capita basis, we look much worse, at eighth. The countries ahead of us, other than Canada and Belarus, have economies largely dominated by oil and gas production. Australia is ahead of Russia, the United States and South Korea. China, at 32, does not make the top 20. 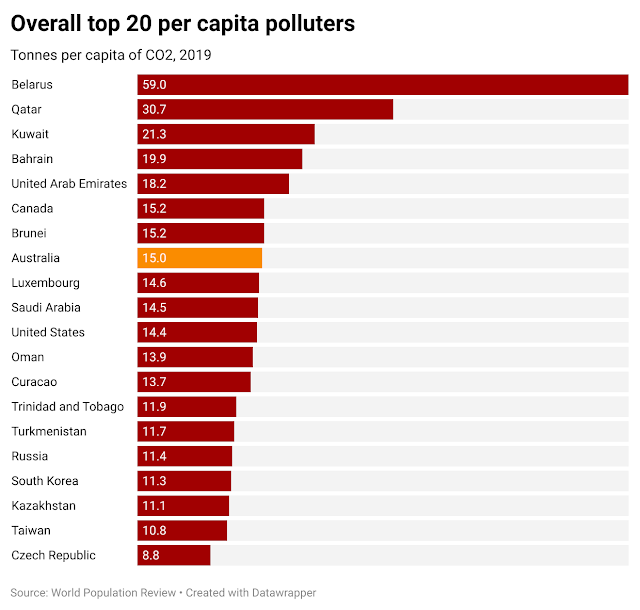 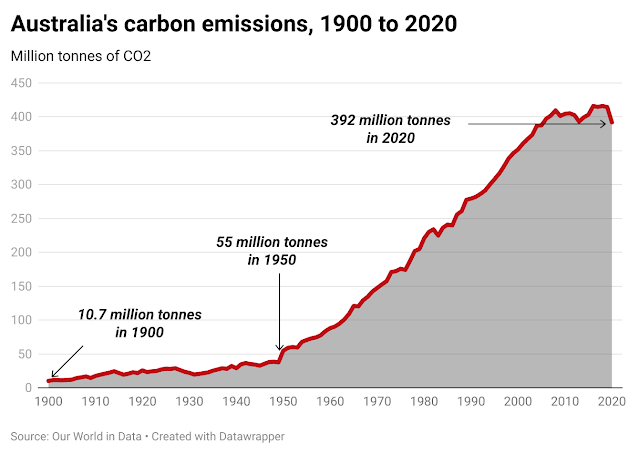 Electricity generation accounts for a third of all Australian greenhouse gas emissions. But it’s the only area currently showing significant improvement. It is likely to be quite some time before the other areas – stationary energy (fuel combustion in the industrial, commercial and residential sectors), transport and agriculture – begin to catch up. Unless that happens soon, the government’s emissions reduction targets are unlikely to be met. 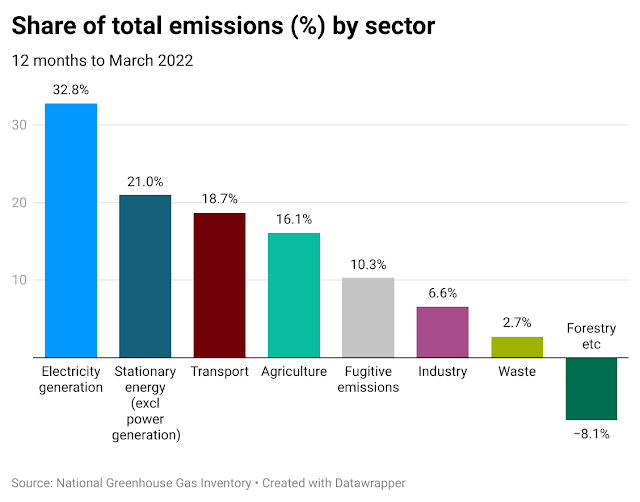 These figures clearly show that tree-planting has been massively oversold as a means of achieving net-zero emissions. Carbon offsets based on land use – even when they are honestly administered, which is not the case right now – simply will not do the job. They currently absorb only 8.1% of annual emissions, and they have limited capacity for expansion. Offsets will never be of more than marginal importance.

The only answer is to abandon almost all use of fossil fuels. This means converting homes, city buildings, agricultural equipment, vehicles and industrial processes to electricity; and all that electricity will have to be supplied by renewables. This necessarily implies that we will need several times as much capacity for power generation and distribution as we have at the moment.

Nevertheless, emissions have begun to fall, and not only because of the pandemic lockdowns. But it is almost all due to one sector – electricity generation. Emissions in this sector fell by 21% in the past 12 years but this chart shows how far we have to go. The other three main polluting sectors – stationary energy use (including gas), transport and  emissions from agriculture – are still trending upwards or at best, sideways. 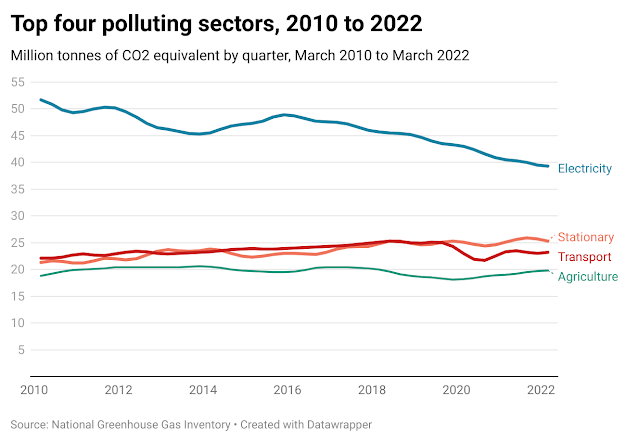 Carbon dioxide is not the only problem greenhouse gas. Emissions of methane (including from livestock) and nitrous oxide (largely produced by vehicle exhausts) show no sign of falling. 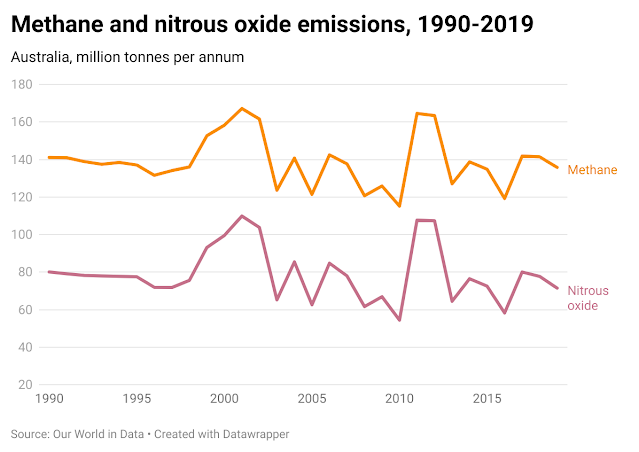 According to the United Nations Environment Program, over a 20-year period, methane is 80 times more potent at warming than carbon dioxide. Methane has accounted for roughly 30 per cent of global warming since pre-industrial times and is proliferating faster than at any other time since record keeping began in the 1980s.

“Nitrous oxide molecules stay in the atmosphere for an average of 114 years before being removed by a sink or destroyed through chemical reactions,” says the US Environment Protection Agency. “The impact of a pound of N2O on warming the atmosphere is almost 300 times that of a pound of carbon dioxide.”

The 2015 Paris Agreement requires all countries to commit to policies aimed at limiting global warming to 1.5 degrees above pre-industrial levels and to ratchet up the results every five years. But there is little consistency between nations. That’s largely because each country could nominate the baseline year against which its reduction targets would be measured.

Findings by Our World in Data’s Climate Action Tracker show that on current international policies, global greenhouse gas emissions will rise until mid-century and then fall, slowly and by not nearly enough to avoid climate catastrophe. By the end of the century, temperatures would rise by between 2.5 and 2.9 degrees.

Even if current targets were achieved by all countries, temperatures would rise by more than 2 degrees. 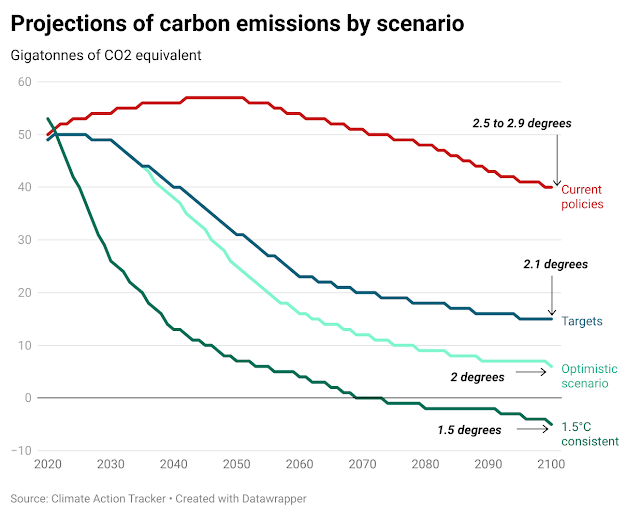 The Albanese government has legislated targets for Australian emissions reduction of 43% by 2030 and to net zero by 2050. The means of achieving these goals are mostly still unspecified.

In 2015, the Climate Change Authority called for a reduction of 45% to 65% by 2030. But the Coalition government did little to achieve that: because of that neglect, the more ambitious goal is now almost impossible to achieve.

Annual emissions are now already 22% below those of 2005, so another 21% will be needed if the government’s legislated target is to be met by 2030. But that first 22% took 12 years to achieve; there is now just over seven years to realise the second. And the government is relying almost entirely on the electricity generating sector to achieve this.

But they cannot rely on electricity generation to achieve net zero by 2050. So although there is 20 years to get there, it will need further massive reform over all sections of the economy – transport, industry, commerce, households and agriculture. Every one of these presents far greater challenges than those found in power generation.

In fact, these are easier targets than they should be. The British Climate Change Act, which has been in force since 2008, also aims to achieve net-zero by 2050 but uses 1990 levels as a baseline. If that baseline had been chosen by the Australian government, it would have to decrease emissions by 31% in the next seven years rather than 21%.

Perhaps the most significant policy initiative so far in place was legislated by the Abbott government in 2016, though at that time it was camouflage for doing nothing. The Safeguard Mechanism provides pollution limits for each of 215 large companies operating in this country.

But under the Abbott formula, those limits were set so high as to have little practical effect. The top polluters went right on polluting. This graph shows the amount of CO2 produced by the top ten emitting companies during the first five years under the Safeguard Mechanism. The new government plans to make Abbott’s scheme actually do something. A draft bill, currently out for consultation, provides for tradeable credits that facilities with relatively low-cost abatement can sell to other firms that have more limited options. It’s the closest thing to a carbon price we’re likely to get.

ARENA, the Australian Renewable Energy Agency, has been refocussed on renewables after the Coalition’s policies of allowing public investment in non-renewables.

A $20 billion Rewiring the Nation program will invest in ensuring electricity grids are adapted to deal with the flood of renewables coming on-stream. Under this program, the Marinus link – the second submarine interconnector between Tasmania and the mainland – will be funded, allowing the state’s renewable hydro and wind power to be ramped up and exported to Victoria and other states.

The government, and Climate Change Minister Chris Bowen, are playing catch-up. After a decade of inaction, a swag of new measures are being planned. They include national electric vehicle strategy, cleaner emissions standards for trucks and buses, a fuel testing program, and investments in hydrogen and in storage. So far, many are still in the consultation period but are likely to be legislated next year.

So far, almost all these initiatives are about one matter – increasing the supply of renewable energy. That is a key component of change, but will not by itself be anywhere near enough to bring Australia’s emissions to net-zero just 28 years from now.

Electricity generation and distribution is the easiest target. All the others are much more intractable and will require new, complex and perhaps costly technologies which may not yet have even been developed.

Companies which rely on gas for their industrial processes will have to switch to electricity. The transition will not be easy, smooth or cheap.

Steel-makers will have to stop using coal in their blast furnaces. New technologies – electricity and hydrogen – are in development but are not yet capable of large-scale production. 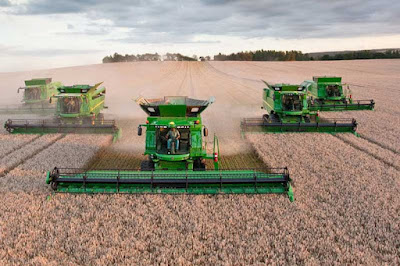 Graingrowers will have to buy electric tractors and harvesters. But almost none are yet commercially available and there are immense technical and financial issues. A Tesla  electric car weighs about three tonnes but the battery accounts for a third of that.  A typical combine harvester weight 14 tonnes. Current technology means a harvester battery would weigh almost five tonnes. The whole machine would cost far more than a conventional diesel version, particularly in the early stages of the new technology.

Methane emissions from livestock can be reduced somewhat by feed additives and changes to farm management, but the technologies remain in infancy. Even the most optimistic assessments say measures are unlikely to achieve more than a 30% reduction – and that will depend on their universal adoption.

Converting cars and trucks to electricity is particularly hard in Australia, where the distances are huge. Electric cars are expensive, charging points scarce and recharge times still far too long. Large electric trucks are available in only minuscule numbers and are even more constrained by time and distance.

On a per-capita basis, Australia is the world’s fifth richest country. If we can’t do it, who can?