Need health care in Australia? Just try not to be young. When there’s not enough health care for everyone, who misses out?

Australia still claims to have a universal health system. That means that when not everyone can be treated, priority is given to those with the most need. Other factors – income, age, social status – shouldn’t come into it.

But of course they do.

Decades of neoliberal economics has had a devastating impact on the efficiency and fairness of this country’s health system. Public hospitals have been run down. Medicare is underfunded and increasingly inadequate. Filling a prescription costs too much.

We have turned away from the European model of healthcare for everyone, towards the American user-pays model of privatised medicine, where your access to treatment is dependent on how much money you’ve got. And private health insurance does not cover consultations with any doctor outside of a hospital admission.

In this increasingly harsh environment, more people are missing out. So who are they?

Not, as it happens, older people. Generally, people over 65 do better than anyone. On average, they have more money than younger people and have greater access to concessions. They pay less for medicines and are more likely to be bulk-billed by GPs.

The poor, as you’d expect, do worse: their health is generally poorer to begin with, and their capacity to pay is limited to non-existent.

But the biggest losers are the young – students, those on low training wages, people with children, mortgages and shrinking wages.

In most parts of Australia it is now impossible to find a bulk-billing general practice. Individual doctors may exempt particular patients – for instance, pensioners – from paying a fee but there is no certainty. For someone not bulk-billed, the average out-of-pocket cost is $42.25, though it can range from $25 up to $80 or more. And it varies according to where you live. 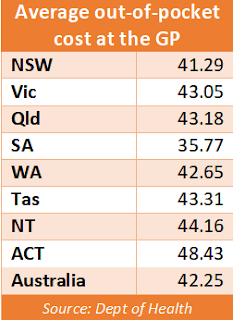 New data from the Australian Bureau of Statistics reveal the extraordinary extent to which the health funding system discriminates against the young. This chart shows the number of people in each age group who needed to see a GP but who did not because they couldn’t afford the cost.

When we look at the proportions of each age group, we can see how people between 25 and 34 – young families struggling most with soaring costs of living and declining real wages – are being punished most.

People with chronic illness, who may go to the doctor every month or more, are disproportionately in lower income categories. That’s partly because poorer communities have generally worse health, but also because serious illness impacts earning capacity so severely. And, of course, they are much more affected by copayments.

Filling a prescription has become unaffordable for too many Australians. PBS copayments were introduced by the Menzies government in 1960, at about the same time that the list of drugs covered by the scheme was greatly enlarged. It stayed at five shillings – 50 cents in decimals – until 1971, when the McMahon government doubled the rate.

Increases under the Hawke and Keating governments between 1983 and 1996 bumped the cost to non-concessional patients – that is, almost anyone with a job – up by 212%.

The Howard government added another 56%. And it has increased almost every year since then, reaching $42.50 in 2020-21. A reduction in the official copayment has been promised by the new government but it will remain higher than the actual cost of most commonly prescribed medicines. The real benefit to patients will be muted. 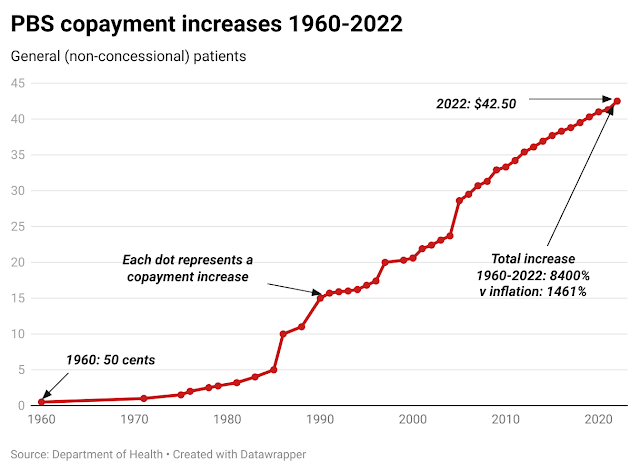 It’s no surprise, then, that these costs most affect the poorest. But no income quintile escapes.

Again, relatively younger people – those most likely to have children and a mortgage – are hit the most. All up, an estimated 770,000 Australians did not fill a prescription in 2021-22 because they couldn’t afford to do so.

Nationally, only 39% of specialist services in 2021-22 were bulk-billed. And that figure is heavily inflated by a few specialties – pathology, imaging, optometry – that commonly base their business models on bulk-billing and large-scale throughput.

Medicare does not release data on each individual specialty, but anaesthetics is more representative of private-practice surgery. Here, the national bulk-billing rate is 11.1%, and the average out-of-pocket cost to the patient is $161.

Those who can afford private care are usually seen within a reasonable time. Others, reliant on overstretched and under-resourced public hospitals, may have to wait for extended periods. This chart shows the age distribution of people who felt they had to wait longer than was acceptable for a consultation:

So what does “longer than was acceptable” constitute? Here is one example: waiting times at one major capital city hospital’s outpatient clinics. These figures refer to the time waited by people at the 75th percentile for their first consultation with a physician or surgeon. That means 25% have to wait for longer. When Medibank was introduced by the Whitlam government in 1975, dentistry was not included because of its impact on the federal budget. The mistake was repeated when the scheme was revived as Medicare by the Hawke government in 1984.

Except for the small numbers able to be treated in state-run public clinics, patients must pay the bill for almost all dentistry in Australia. Good oral health is almost entirely the privilege of those with higher incomes. To the extent that people under 25 are protected, it is only that they have not yet had time for their teeth to rot.

When we look at the distribution according to income level, we again see the familiar pattern – but with one difference. Even the richest 20% of the population can be put off by the costs of dentistry.

Private health insurance is of doubtful value here. In most policies, the rebate is less than half the cost of the service – and private insurance is skewed heavily towards the wealthy. Those who need it most generally can’t afford it.

Mental illness is a major cause of disability and distress. It, along with most other pathological conditions, is strongly associated with socioeconomic status. The poor suffer more than the rich.

The Australian Institute of Health and Welfare has calculated that in 2018, 551 people lost their lives because of mental illness and substance use. Each of those people could have expected to live, on average, for another 20 years if mental illness had not cut those lives short. In all, over 11,000 years of life were foregone in that year.

But most people with mental illness live with it, rather than dying from it. One measure of the impact on the community is the total number of years people live with the disability of mental illness. The most recent estimate of that is 620,000 years.

The ultimate expression of untreated or unsuccessfully treated mental illness is, of course, suicide. The AIHW conducted a multivariate analysis to show the distribution of suicide risk among various social groups. For instance, in the table below, we can see that females have a hazard ratio of 1, and males of 3.12. This means males are 3.12 times as likely to take their own lives as females.

Perhaps unexpectedly, young people are not at greater risk of suicide than those in older age groups. Although suicide is high on the list of fatal conditions for younger people, their general disease burden is much less. 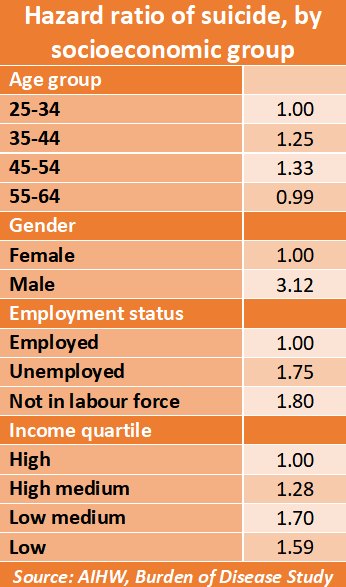 Nevertheless, mental illness is of massive importance to younger Australians. And there is a quite dramatically clear relationship between age and the inability to afford necessary care from mental health professionals.

Public psychiatric care has become increasingly scarce. The old psychiatric hospitals were abandoned in the middle of last century in favour of cheaper community care, saving state governments a great deal of money – but those savings have come at a price. There were 87% fewer psychiatric beds per 1,000 population in 2016 than there were in 1960. Now, people in need of high-level care find it’s too often not there for them. 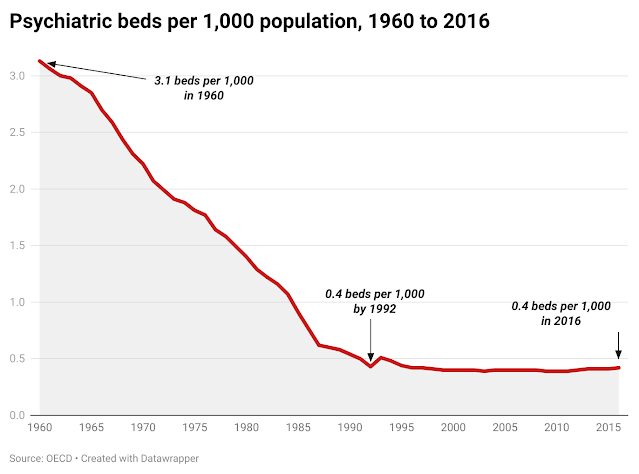 As the number of beds fell, so did the number of public-sector psychiatrists. Those who remain are often attached to general public hospitals and deal overwhelmingly with the most serious and critical patients. The rest are dealt with in the community, often with minimal contact with psychiatrists.

As with other areas of healthcare, private practitioners have become more significant for non-hospitalised patients. They are not cheap, and Medicare coverage is seriously inadequate. According to the Royal Australian and New Zealand College of Psychiatrists list of typical charges, the out-of-pocket costs are substantial and quickly mount up. People needing psychiatric care can seldom be dealt with in a single session: many need extended treatment. But the Medicare rebate cuts out after ten sessions, leaving the patient to pay a probable $230 to $320 for each further consultation.

Psychologists are also expensive and, again, Medicare coverage is inadequate. This fee schedule is currently recommended by the Australian Psychological Society to its members:

Apart from dentistry, private health insurance does not cover consultations outside of a hospital admission. Patients are left to pay the whole of any out-of-pocket cost.

In the absence of adequate public-sector services, mental health – and every other aspect of healthcare – are being denied to a large proportion of society. As we have seen throughout this report, young people and young families are most at risk. These results hint at a toxic ocean of untreated illness and of millions with a sense of alienation from a society which has left them on their own.