Thousands dying. A whole economy in chaos. Hospitals in pandemonium. Why won’t our governments do their bloody job? 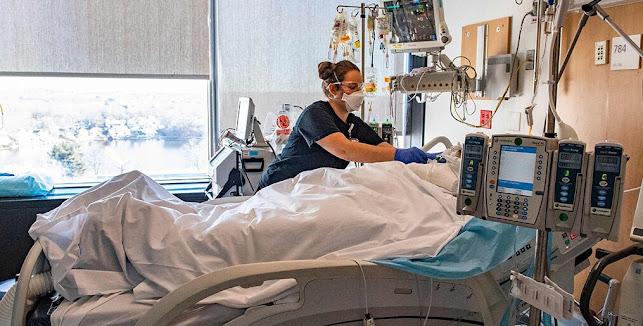 Almost everyone now knows that living-with-Covid isn’t working. Everyone, that is, except the people we have elected to run the country.

We’ve been told – most recently by the monumentally disappointing Mark Butler – to take personal responsibility. We’re on our own. That’s the deal.

We get sick. Some of us die. Our workplaces are in disarray, our airports can’t cope, our hospitals are in unprecedented turmoil, childcare centres shut, aged and disability care shot to bits.

But we’re on our own. This is what “personal responsibility” feels like.

It isn’t working. There are societies – in south-east Asia, particularly – where peer pressure to wear a mask is so pervasive that everyone does. They don’t need to be told.

Australian culture is not like that. If you wear a mask in any cinema, shop, supermarket or airport, you may be almost the only one. Without a mandate, widespread mask-wearing just isn’t going to happen.

But we know how powerful masks are in controlling the spread of this virus, particularly as new and ever more transmissible variants take hold. Masks have been found to reduce transmission in Germany by 47%. And an Australian study, published in Nature Communications, found mask-wearing reduced transmission in the second Victorian Covid wave by about 40%

Right now, the effective reproduction number of circulating variants is above one, meaning that – even though we’re in a trough between two waves – the virus is spreading, not contracting. Making masks compulsory in all or most crowded indoor settings would send this number sharply below one, recapturing the control that we once had but have now abandoned.

We don’t need lockdowns or restaurant closures. But we do need more than we have now.

Governments, though, are having none of it.

“I don't see a return to very broad-based mask mandates is the advice I'm getting but clearly the message is take responsibility, make your own choice,” the Health Minister, Mark Butler, told the ABC.

Personal responsibility, then. Even though it’s clearly not working.

The constant line from Health Ministers is that they are “following the health advice”.

What advice would that be, then? Despite what the ministers claim, the weight of expert evidence is now clearly behind some form of mask mandate. Work by Professor Adrian Esterman, head of biostatistics and epidemiology at the University of South Australia, has made him particularly vocal.

“I think it’s a very bad move. It smacks of the government and government authorities treating this as if it’s all over,” he said of the recent removal of mask requirements in airports.

“They’re taking [masks] off in the airport, where the highest risk is ... work that one out.”

A study by the Burnet Institute found that reducing transmission by only 10% – and widespread mask-wearing is likely to do more than that – would save as many as 2,000 lives a year

In Victoria, the pretence that politicians were following the "health advice" was revealed for what it was. The state's chief health officer, Brett Sutton, advised a return to mask mandates. The health minster admitted she'd got that advice and rejected it. This was a political decision, made at the highest levels of that government, and health advice had very little to do with it.

Vaccination is central to the fight to control this disease. But there are three big problems.

·       Immunity wanes fairly quickly, so people with only two shots are now much more vulnerable than they probably think.

People with only two doses are still being described as “fully vaccinated”, even though they’re not. But since we started to “live with Covid”, vaccination is no longer seen as such an urgent issue.

Anyone without a third dose should not be regarded as fully vaccinated. They’re not. But, as this chart shows, only two-thirds of the population have had that third shot. 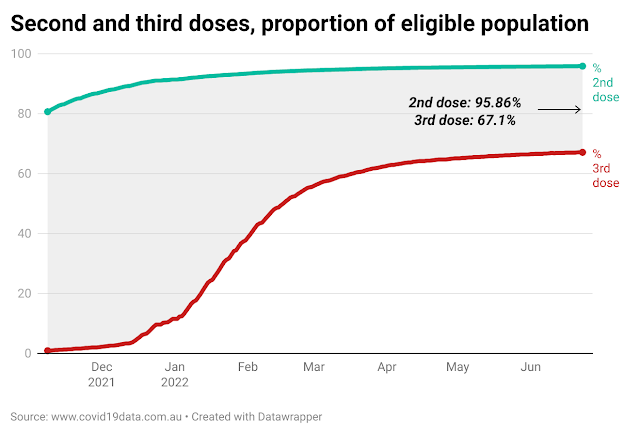 That chart was up to 23 June. When we take the third-dose data further, we can see that uptake has flatlined. It has taken two months to increase by less than one per cent. 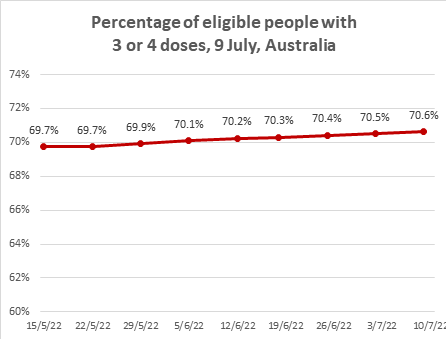 This is what it looks like around the country: 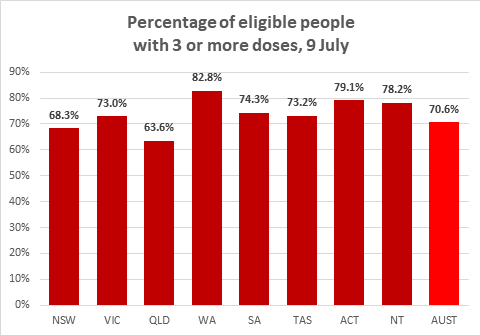 A fourth dose has now been authorised for people over 30. But what practical difference will that make, when so few have even had their third?

Across the country, hospitals are being disrupted by Covid-related staff absences. Authorities are reluctant to share their data but on any given day, it is now likely that around 10,000 doctors, nurses, paramedics and other staff are absent either because they are themselves infected, they have to look after a child who is infected or whose childcare centre is shut, and because of burnout.

The extent of this disruption is closely related to the number of active cases in the community. We are now in a trough between waves; as the expected third wave grows, we can expect the disruption to become worse.

This chart shows the pattern of infection since restrictions were lifted late last year. Absences are creating substantially more problems in hospitals than patients with Covid-19, who comprise only about 3.5% of all inpatients on an average day. 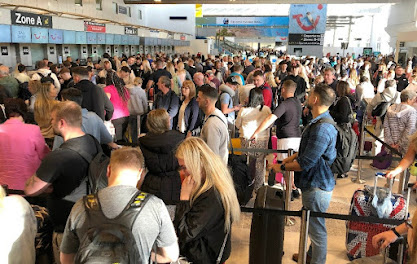 Staff absences are also disrupting businesses across the economy. Air travel has been in chaos because of the absence of staff from pilots to baggage handlers. VIP passengers such as politicians, of course, don't have to queue.

During the first Omicron wave in January, 22% of employers had staff who did not come to work because of the pandemic. “For businesses with staff absent, the most common reasons for this were self-isolation or quarantine requirements (82 per cent) and staff having COVID-19 symptoms or illness ( 73 per cent),” said John Shepherd of the Australian Bureau of Statistics.

More than 80% of deaths have occurred since the 1 December. These are the figures across the country:

This chart shows the same data in a different way: the cumulative number of deaths at 1 December, and at 11 July. 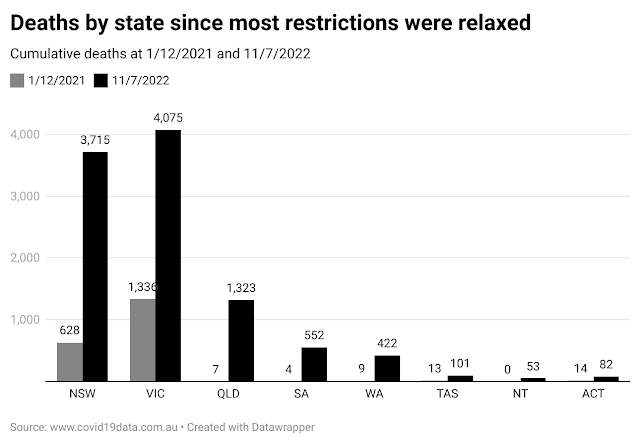 Health ministers know this. Premiers and the Prime Minister know this. But still they refuse to take effective action.

New Omicron variants, BA.4 and BA.5, will become dominant in Australia within the next month.

Viruses are driven by evolutionary pressure. They mutate all the time – and RNA viruses, like this one, do it a lot. In order for a random mutation to become dominant, it has to out-compete all the others by being more transmissible. Whether it’s more or less pathogenic is irrelevant to that process.

BA.4 and BA.5 are substantially more infectious than any previous variants. They also, unfortunately for us, are better at evading our existing vaccines; and although they do not appear to cause worse disease, more people will inevitably get sick and more will die.

Pfizer and Moderna have developed new versions of their mRNA vaccines to specifically target the first Omicron variant, BA1; and have applied for registration in Australia and the United States.

According to Moderna, its version “elicited potent neutralizing antibody responses against the Omicron subvariants BA.4 and BA.5 in all participants regardless of prior infection.” But the company did not say how this compared with its effect on earlier Omicron variants.

Pfizer, on the other hand, was a bit less upbeat, saying: “Preliminary laboratory studies demonstrate both Omicron-adapted candidates neutralize Omicron BA.4 and BA.5 though to a lesser extent than they do for BA.1.”

But there won’t be much point to these vaccines if we don’t use them, will there? And what do you reckon the chances are of that?